As we all know life doesn’t always follow Plan A.  News had come through to the Learned Clerk that our Master and Clerk’s Lunch at HQS Wellington was under threat as a result of a change of caterers so the Clerk and I took the opportunity to view Brewer’s Hall as an alternative venue.

The Hall is tucked away behind Guildhall in Aldermanbury Square and plays home to the Worshipful Company of Brewers.  It is the third Hall for the Company, built after WW2 and its main rooms are lined with wood panelling and with plenty of daylight coming in and would suit one of our smaller Company events.

A decision on whether to use Brewer’s Hall now follows, so watch this space!

Lunching with the Masons

In my working days I used to visit the Skillbuild National Finals and would spend time fascinated by the stone masons working on their competition pieces, turning a piece of stone into what to my mind was a piece of art.

The Mason’s Company fully support the craft of stone masonry and it was a pleasure to meet and talk to members of the Company and to learn more about how the Company works with stone masons in the UK.

I have now learned to expect the unexpected with Livery engagements and had great fun exchanging stories on bringing up grandchildren and discussing whether or not one should take up a hobby of hop growing and operating a micro-brewery!

Malcolm and I were honoured to be invited to attend the Lord Mayors Banquet for Master, Prime Wardens and the Upper Bailiff of the Livery Company of the City of London which took place at Mansion House.

As we entered Mansion House an honour guard from the Honourable Artillery Company was there to greet us and all the guests.     The Lord Mayor, Alderman Peter Estlin, his wife, and the Sheriffs and their Consorts greeted all the guests before joining us for a glass of Champagne before dinner.

On these occasions you can never be sure who you will be seated with, but we were fortunate to be seated with His Honour Judge Nick Hilliard, his wife Jane, The Chief Commoner and Master Glover, all of whom were excellent company and we exchanged advice on how to refurbish a kitchen and discussed the more difficult topic of reducing knife crime.

Speeches were given by Master Mercer on philanthropy, The Lord Mayor, and Master Grocer who had the audience laughing at some appropriate jokes.

In the guidance notes for Masters there is a “three-line whip” for the United Guilds Service which takes place annually at St Pauls on the morning after the Lord Mayors Banquet. Having said that, as we walked into St Pauls bathed in the spring sunshine it was certainly a spectacular occasion with all Masters wearing their gowns and many ladies resplendent in their spring hats! 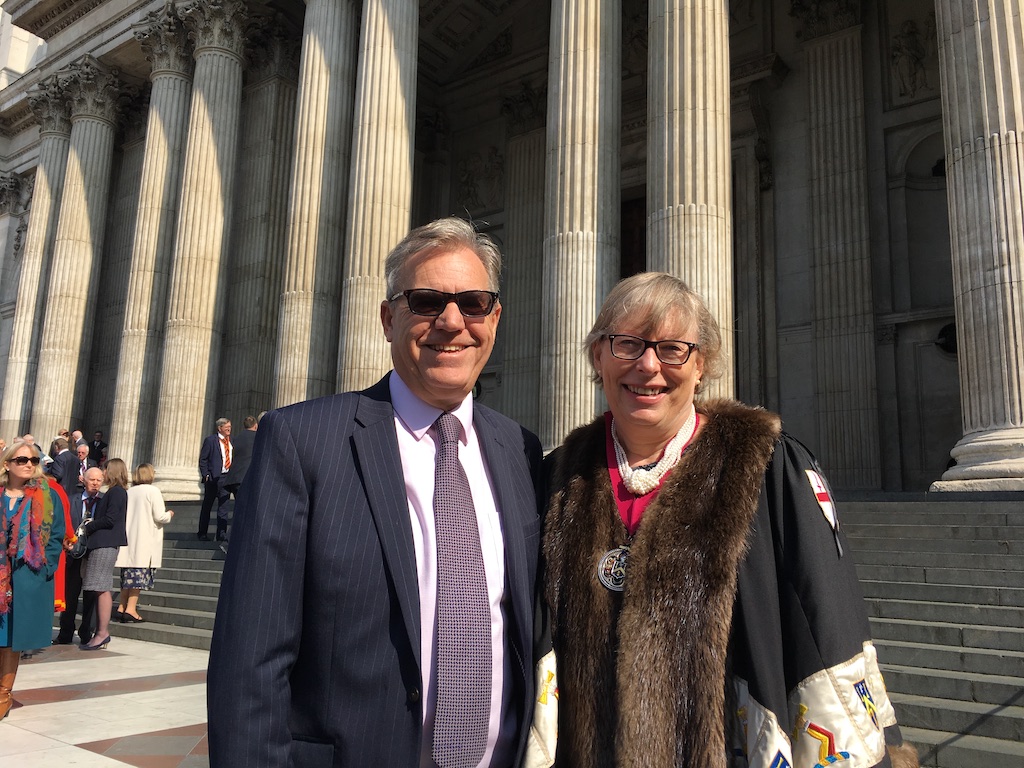 The United Guilds Service was established in 1943 as a response to the challenges faced by the City of London following the Blitz.  The first service to be conducted was held on Lady Day – 25th March 1943. The King was petitioned to attend, along with Masters and Prime Wardens in their robes with such of their livery as ‘may be able’.

The King did not attend; but the Lord Mayor and the Aldermen did. Dr Fisher, the Bishop of London, gave the address. The then Lord Mayor Sir Samuel Joseph hosted an ‘austerity luncheon’ after the service for the Masters and Prime Wardens. The Lord Mayor hoped that the service would be held annually as an opportunity for the Livery to ‘approach God with one voice of united prayer’.  76 years later I do believe that his wish has been fulfilled!

I was particularly taken by the choristers of St Pauls, some of whom were tiny but their voices certainly were not. I was very moved by their angelic voices as they sang Psalm 85!

After the Service the Tylers and Bricklayers joined guests from the Worshipful Companies of Carpenters, Gardeners and Builders Merchants and the Guild of Entrepreneurs for lunch at Carpenters Hall.