It is always an absolute joy to watch a craftsman at work as they always make the project they are working on look so easy.  Malcolm and I took time out of our schedule to join the Master and Mistress of the Worshipful Company of Joiners for a demonstration of wood turning at the Dutch Church in the City. 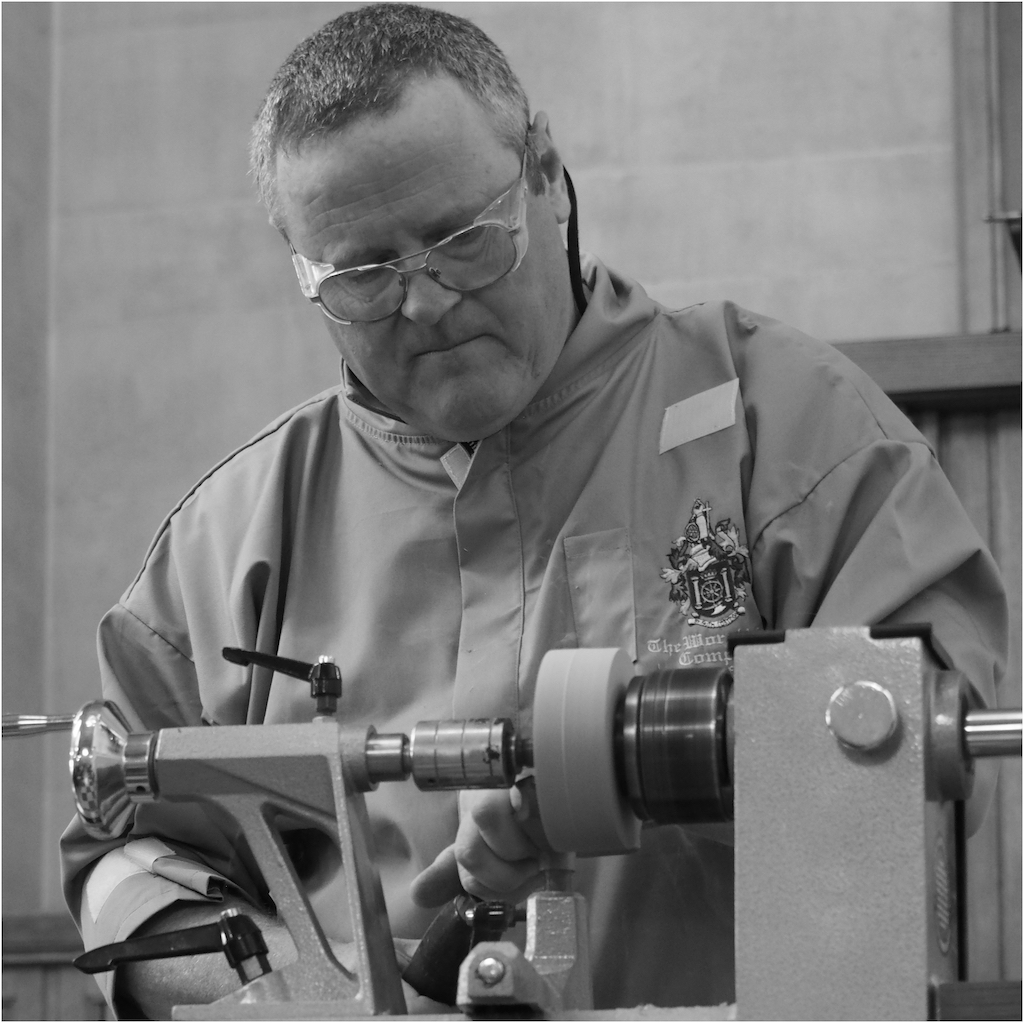 Liveryman Les Thorne had set up his lathe in the church, along with a video camera so we could see his work close to hand.  His plan was to turn two pieces of wood into a single candlestick and that is just what he did.  As he worked, he explained every action he took and showed us the tools of his trade, which he had made himself!

After the demonstration there was a raffle, raising funds for the WCJ Charitable Trust, to win the candlestick itself.  Sadly, we did not win, but we will remember the afternoon for quite some time to come!

Who doesn’t love a curry!

Answer, 1500 guests who attended the ABF Big Curry Lunch raising funds for all members of Her Majesty’s armed forces.

Renter Warden Simon Martin is a member of the Soldiers Charity committee arranged for a group of some 20 Tylers and Bricklayers to attend the Curry Lunch at Guildhall.  We gathered in Livery Hall for a pre-lunch glass of bubbly and then headed into the Hall for a delicious curry.   As usual I chose the wrong queue to join, but once we got our meal, I can reveal the food was delicious.

After lunch it was off out into the Ambulatory to do some shopping amongst the Livery Company stalls. I can report that the strawberries from the Fruiterers were delicious!

I was delighted to accept an invitation from PACT to attend the Sir Harold Hood Memorial Lecture given by The Recorder of London, HH Judge Nick Hilliard QC.  I had met Nick a few weeks earlier and from that conversation it was easy to tell that he is passionate about reducing knife crime.

In his lecture, He made it most clear that there was a lack of resources to help reduce knife crime, that support for young people had to come from the home, and to encourage young people off the street and find volunteers to help the organisations trying to achieve a reduction in crime.

Much of his lecture was given up to talking to four ladies, the first of which was Kerry whose then husband had been arrested and was found guilty of a crime.  She decided that this was not the life for her, went to university, achieved a degree and now works as a volunteer with PACT.   Her aim was to set up a university scholarship to support a student whose parent had been in prison.

Pastor Lorraine Jones had lost her son, Dwayne.  He had gone to help someone who had been attacked, but was stabbed with a sword and sadly died two days later.  Instead of descending into depression Lorraine decided to start the “Dwaynamics” project in the LB of Lambeth.  Young people from the age of 5 upwards can join this boxing club which has now grown to a membership of 135, and is hoping to move to new premises.  The Club has the full support of the local borough commander in the Metropolitan Police and PCs in the area go along to help with fitness training.  Lorraine also told us that she had been made “Inspirational Woman of the Year”.

We also heard from volunteers who give advice and help to the families of prisoners and are there to help witnesses attending court at the Old Bailey in relation to cases involving members of their own families.

This was one of the occasions that will remain as a highlight of my year as Master and reminds us all of the importance of helping others.