November is a busy month in the City calendar with the installation of the new Lord Mayor and the Remembrance Day service and parade. It is also a time of competitions and awards ceremonies in our three crafts.

“We will Remember them”

I have been invited to represent the Company at two Remembrance services in the City. The first was the annual Garden of Remembrance Service in St Paul’s Churchyard, held on 8 November. The Masters and Clerks gathered at Plaisterers’ Hall on London Wall. We were lined up in order of precedence and followed the Standards of the Royal British Legion in procession down to St Paul’s where we formed up in ranks of six. Fortunately, it was a bright, crisp morning. Shortly before 11am, the Dean and other Ministers arrived, leading the Lord Mayor and Sheriffs to their places. There was a short service, accompanied by the band of the Grenadier Guards, concluding with the familiar exhortation, the Last Post and a perfectly observed two-minute silence before Reveille was sounded. There then followed the planting of the crosses in the Garden of Remembrance, led by the Lord Mayor and Lady Mayoress, the Sheriffs, the Dean, representatives of City Schools and emergency services and with the Masters of the Livery Companies approaching in ranks of six. Very moving.

The week ended with a Remembrance Sunday service in St Paul’s Cathedral on 14 November. The Masters, Wardens and Clerks were seated in the south transept, all gowned and badges worn. The Aldermen were seated in the Choir and were joined by the Sheriffs and the new Lord Mayor, Vincent Keaveney, resplendent in his full robes and preceded by the sword and mace. Finally, HRH Prince Michael of Kent, representing the Queen, took his place and the service began. It was a moving service with wonderful singing from the choir. The timing was impeccable. As the last echo of the final note of the Last Post died away, the great bell of St Paul’s struck eleven and there was complete silence. The service ended with a rousing singing of the National Anthem and then the Masters, Wardens and Clerks formed up on the south steps of the Cathedral. We processed up New Change and down Cheapside to the Royal Exchange (fortunately the roads were closed) where there was a wreath laying ceremony at the City of London War Memorial, Royal Exchange opposite the Bank of England. The wreath laying was led by the Lord Mayor and Prince Michael of Kent and accompanied by the band of the Honorable Artillery Company. The ceremony ended with a march past of the band, a detachment of the HAC, a group of Old Comrades and a gaggle of army cadets, scouts, guides and brownies, with the salute taken by the Lord Mayor from the viewing platform at Mansion House. 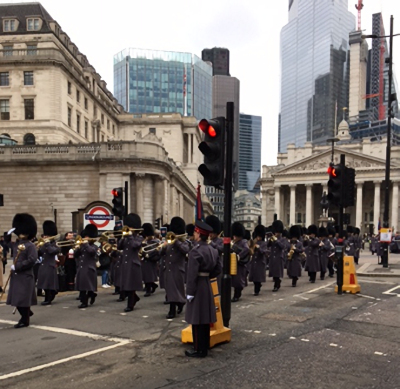 “And the winner is…”

I was invited as a guest of the NFRC to the UK Roofing Awards 2021, held at the InterContinental London – the O2 on 5 November. The awards were cancelled due to covid in 2020 so there was an air of celebration in the room as nearly 1,000 roofers, sponsors and their guests gathered in the ballroom of the hotel. It was great to witness the quality of the projects that were shortlisted for awards in the Roof Slating and Roof Tiling categories but not surprising to find that Liverymen Andy Rowlands (Roof Slating) and Franke Clarke (Roof Tiling) were on the list, with Frank’s team winning the prize in their category. Liveryman Gerald Emerton’s company also triumphed in the small-scale project category for some fine work on the restoration of a slate covered turret on a village hall.

A few days later, I was the guest of Liveryman Keith Aldis at the Brick Awards dinner at the Royal Lancaster Hotel, organised by the Brick Development Association. The Brick Awards celebrate the use of clay bricks in a wide variety of building projects ranging from individual houses to large public and commercial buildings and from traditional to highly innovative schemes. The judging panel comprised architects, brickmakers, developers and brickwork contractors and included Past Master David Cole-Adams and Liveryman Ian Wilson. The Visitor Centre at St Albans Cathedral, which our Clerk, Heather Smith, commissioned and oversaw in her previous role as Lay Administrator at the Cathedral (using bricks from Liveryman David Armitage’s York Handmade Brick Company), was Highly Commended in the Public buildings category, coming second behind the Lambeth Palace Library – a case perhaps of Archbishop trumps Bishop? I was invited on to the stage to present the award in the Overseas category. The prize was awarded to a community project in China who, perhaps unsurprisingly, had not sent a representative to collect the award. Keith will now have to arrange for the delivery the clay brick trophy to the winners in China!

On 18 November, I went with the Chair of the Craft Committee, David White, to the SkillBuild 2021 National Finals held at the National Construction College at Bircham Newton in Norfolk. In previous years, SkillBuild has been part of WorldSkills UK and held at the NEC but this year the national finals in different categories have been held at different venues around the UK. The roof tiling and slating competition was held at Rowlands Roofing in Hereford in the previous week but the finals in bricklaying and wall and floor tiling were held at the NCC alongside plastering, stonemasonery, painting and decorating, carpentry, furniture and cabinet making and joinery, with apprentices from across the four countries of the UK taking part. The standard of work produced by the young apprentices under the pressure of the competition was astonishing and it was a privilege to have an opportunity to meet and chat to the next generation of master craftsmen. The winners will be announced next week and the winning apprentices in the bricklaying and wall and floor tiling categories, as well as the winning roofing apprentice from the Hereford competition, will be invited to the Craft Awards Lunch next March. The Company sponsored the award in the bricklaying stretch test (a separate competition of speed and accuracy) and I was delighted to present the award to the winning apprentice. 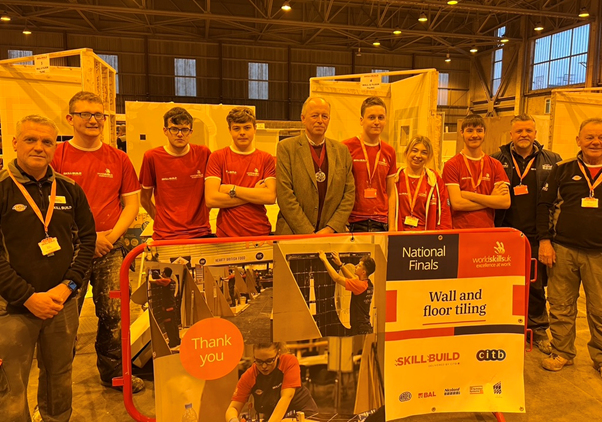 The support given by the Company in various ways to our three crafts is an essential part of what we stand for in the 21st century. It has been wonderful to be able to witness the quality of the craftsmanship at first hand and a privilege to represent the Company at these events. I am grateful to Court Assistant David White for his leadership of the Craft Committee and for his hard work in nurturing and strengthening our relationships with the trade bodies and individuals who represent the crafts.