A new year but the spectre of covid continues to have an adverse impact on work and social life and make event planning at best uncertain.  Fortunately, January is generally a quiet month in the Livery world and therefore there have been fewer occasions when I have had to ask “is the event going ahead?” or consider “should I take the risk and attend this event?”.

The streets of the City were eerily empty – perhaps in part because some people were still on holiday at the end of the first week in January but mainly, I suspect, because of the covid “work from home” order.  The City New Year service is usually overflowing, with late arrivals crammed in behind pillars.  But not this year – St Michael’s Cornhill was, at best, only half full, with the congregation masked.  The Lord Mayor and the Governor of the Bank of England read the lessons, the choir sang beautifully and the highlight for the congregation was a rousing, if muffled, rendition of “I Vow to thee my Country”.  The sermon was given by Jeremy Marshall, the former CEO of Hoare & Co and first non-family member to hold the post.  Mr Marshall spoke movingly of a terminal cancer diagnosis 8 years ago and his simple, yet profound faith so that he does not fear death.  A very powerful and thought-provoking testimony.

Sadly, the reception at Drapers’ Hall that usually follows the New Year service was cancelled but there was an opportunity to greet fellow Masters and their Clerks on the steps of the church after the service.

The lecture covered traditional lime-based mortars and a demonstration of four traditional pointing techniques.  There is a full report and some excellent photographs in the event reports section of the Company website.  I was invited to observe the demonstration at first hand and to attempt some of the pointing techniques that Gerard and John had executed.  I can report that it is much  than it looks and I now have an even greater respect for the skills, stamina and technical expertise of the craftsmen and women who execute these skills to a high standard on site.

We had always planned to hold this event on Zoom to enable all members of the Company to watch the lecture and demonstration in a way that would not have been possible if we had met in person.  The filming of the lecture and demonstration was undertaken by Gerard’s son, Liam, also a craftsman bricklayer, who expertly used two cameras to capture the presentation and to provide close ups of the detailed work.  I must also thank Gerard’s wife Fiona, and Liam’s partner, Ellie, who kept the team in the workshop refreshed. 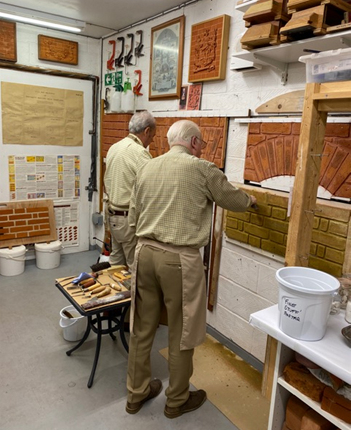 It is undoubtedly one of the few positives to emerge from the pandemic that we can film and present a lecture and practical demonstration in this way to more than 30 people, watching live from their homes all over the country and abroad, in a way that would not have been envisaged before the first lockdown in March 2020.  I hope that this is an initiative that we can maintain and extend to demonstrations of our other crafts.  We should also investigate whether we can open up such lectures to members of other Companies in the Construction Group of Livery Companies.

No functions in the City for nearly a month and then two in the same day!

I was invited to attend the Worshipful Company of Masons Epiphany Court Luncheon held at Mercers’ Hall.  This was a relaxed and happy occasion with just two other visiting Masters:  the Master Plumber and Master Chartered Surveyor.  The principal guest was Dr William Ricketts, a lung cancer specialist from Barts, who has been on the covid frontline for the last 22 months.  Dr Ricketts spoke eloquently and thoughtfully about the strain on NHS staff of dealing with covid patients, especially in the early months when treatment techniques had not been developed and deaths were common.  He also offered a glimmer of hope that the omicron variant does not appear to cause such severe illness and that the number of hospital admissions were starting to fall.

In the evening, our Clerk, Heather Smith, and I attended the Worshipful Company of Plaisterers Masters and Clerks dinner.  The Plaisterers generously invite all the Masters and Clerks of the other City Livery Companies to attend and more than half were present.  The seating plan must be a work of great skill and diplomacy, not least as there had inevitably been some last-minute cancellations and dropouts.  It was a splendid occasion in the magnificent Plaisterers’ Hall.

The principal guest was Sir Robert Buckland, former Lord Chancellor and Minister of Justice.  It was interesting to compare and contrast Sir Robert’s recollections of his time in office with those of David Gauke, who was the principal guest at my Installation Lunch at the end of September 2021.  By convention, the Clerk to the Plaisterers’ Company replies on behalf of the Clerks to the Master’s speech of welcome and her gentle teasing.  Both speeches were suitably restrained and well done.

Two wonderful events in the same day which ended any vague of hope of a dry January or a New Year diet!