Celebrating the Thirtieth Anniversary of the Chartered Architects

2019 is the thirtieth anniversary of the Grant of Livery status to the Worshipful Company of Chartered Architects and the Master and Consort were invited to join Master Architect, other Masters and members of the Company to celebrate this achievement at a Livery Banquet at the beautiful Drapers Hall.

As part of the celebrations the Company had published “The Livery Halls of the City of London” in late 2018, and it had arrived for me under the Christmas Tree.  It’s a coffee table sized book with the history and photographs of the extant Livery Halls in the City.

After a delicious meal, the guest speech was given by Tony Wheeler AO. Co-founder of the Lonely Planet Guide Book company.

One of the highlights of the year is our Craft Awards, which makes for a great deal of work for the Clerk, the Chairman of the Craft Committee and the Master.  Not only are there speeches to be written but prizes and certificates to sign and put together, and ensuring the winners and principal guests are fully briefed ahead of the Lunch.

Whilst this week may not have too many engagements for the Master it does provide time to plan ahead for the coming months, particularly the events that the Master must arrange.

Lunching with the Environmental Cleaners

From time to time the Clerk receives an invitation for the Master for a special reason.  Such an invitation was received from Master Environmental Cleaner, Maureen Marden, to her fellow Lady Master Tyler and Bricklayer to attend their Court Luncheon in the beautiful Armourers’ Hall on Tuesday 5 February.

When you arrive at a Livery function as a Company guest someone is delegated to meet and greet you. On this occasion the first question to me was – “Weren’t you ever frightened in Sao Paulo?” Answer “No, but then I was a child at the time!”

I was fortunate to meet fellow Masters Air Pilot and Armourer & Brasier who regaled me with a history of the beautiful Armourers’ Hall; which had survived the bombing of the City in WW2, and the paintings in the Livery Hall.    Lunch provided me with the Honorary Chaplain as a dining companion and I had not expected to discuss such a wide variety of topics over lunch! 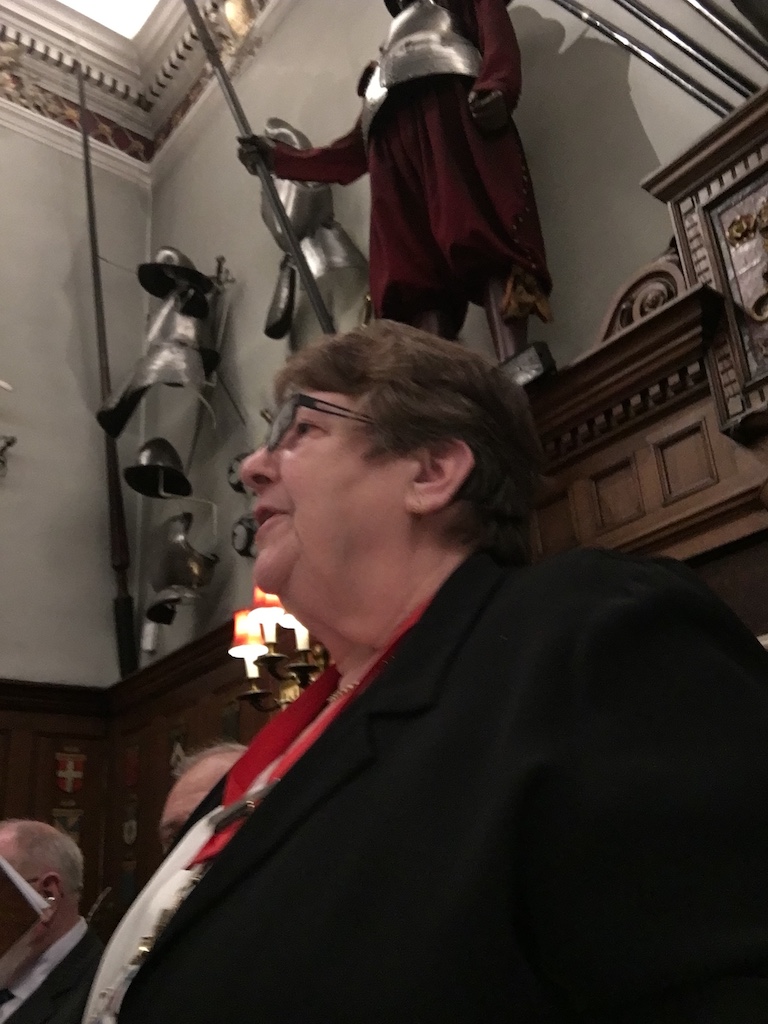 This lunch proved to me what a fascinating time you can have as a Livery Master.

It has always struck the Clerk strange that there was a Wine Committee within the Tylers & Bricklayers, but no Committee to take care of the Treasures owned by the Company, particularly as the value of the treasures far exceed that the of wine held on bond!

The first meeting was held at the home of Past Master Roger Westbrook and reviewed the Terms of Reference and set up policies for the management of the Company’s treasures.

As with most organisations the vast majority of work and decision making involving the Company is carried out at Committee level.

The Communications Committee have a diverse role dealing with membership matters, Company

Events, press and publicity, and GDPR.  Membership of the Tylers and Bricklayers is strong but there is always room for growth, and equally important is that we must retain membership.

The Finance Committee reviewed the Annual Accounts and financial reports for the current Livery year. The Company is in sound health thanks to the efforts of our Learned Clerk.

After the Committee Meetings it was time for Common Hall, which gives Liverymen the opportunity to review the finances of the Company, to learn about its charitable activities and to discuss matters of common interest.  In this digital age and GDPR controlling data there was a very interesting discussions on whether we should continue with our “white book” (membership directory).

After the meeting concluded it was time for the Livery Dinner, the only event of the year limited to Liverymen, and a random seating plan which gave opportunities for all to dine with other members they may not necessarily know.

Tylers and Bricklayers thoroughly enjoy dining at Cutlers Hall, and a “winter” style menu had been put together for the evening, along with some fine wines. 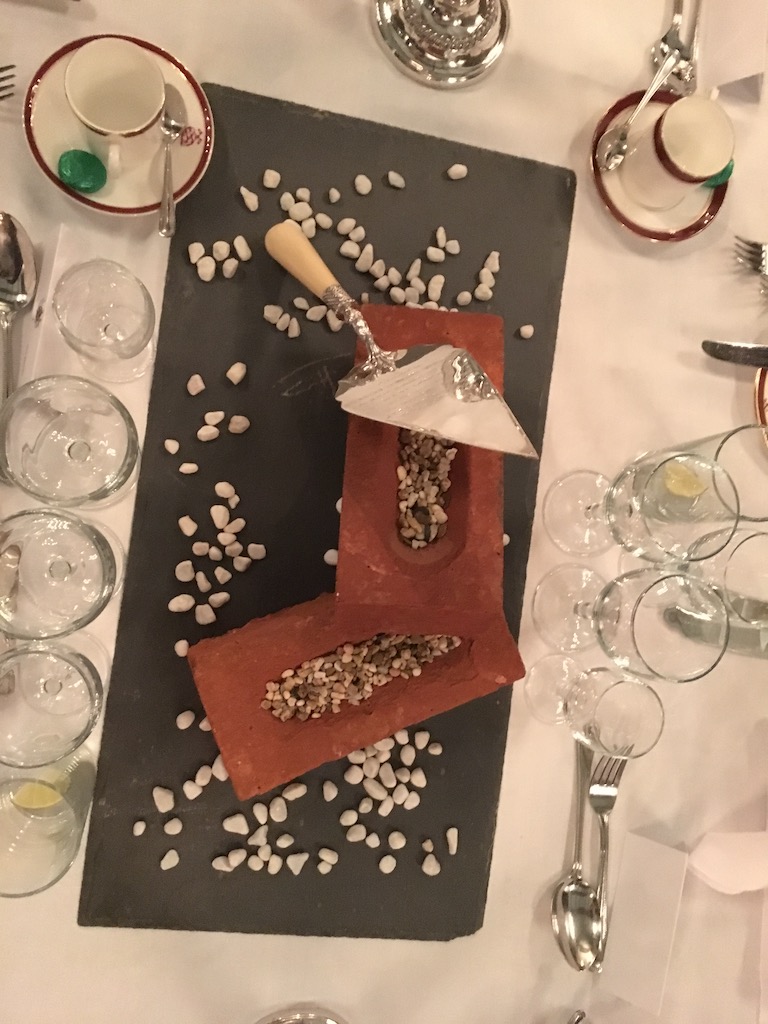 Often it is the small touches that matter, the Staff at Cutlers Hall had put out some bricks and trowel for the occasion, whilst it may not sound terribly interesting, the Master was touched to see the effort that had been made.

Lunch with the Judges

I was delighted to be invited by Sheriff The Honorable Liz Green to attend a lunch with the Judges at the Old Bailey on the 3rdof December.

On arrival at the Bailey I was shown to the Sheriff’s Chambers and was joined by a number of guests and Alderman Professor Michael Mainelli, who had just finished his term of office as Master World Trader.

Over lunch I was intrigued to learn of the life of a Judge and the sort of cases they presided over at the Bailey.  At the time the cases in the Courts involved ranged from a stolen handbag up to murder. The judges explained that they had to try to become immune to some of the sights and sounds they heard but that, on occasion, it could be very difficult.

After lunch I sat in on a case as an observer.

I always consider that Christmas begins as we attend the Carol Service at St Margaret Lothbury.

When I talked to Honorary Freeman Richard Townend about which carols to have at the Service I was keen to make sure they were all our favourite carols and would link in with the readings during the Service.

The Choir at St Margaret are behind and above the congregation and, to my mind, have the voices of angels!  As they sang Stille Nacht I couldn’t help remembering my childhood Christmases and the wonder of Christmas!

A new life for Robert Browne!

The final element of the 450thCharter Anniversary Commemorations concerned a portrait of Tyler and Bricklayer Clerk Robert Browne painted by Mason Chamberlin a member of the Royal Academy.  Robert Browne was Clerk to the Company from 1766 to 1791 having been Beadle before that. He must have been very well thought of to have a portrait painted by Mason Chamberlin, and history records that the portrait was displayed at the Royal Academy.

After the Anniversary exhibition closed the portrait was restored by fine art restorer Simon Folkes and the frame by gilder and restorer Bruce Francis, and the portrait has proven to be more valuable than originally thought. 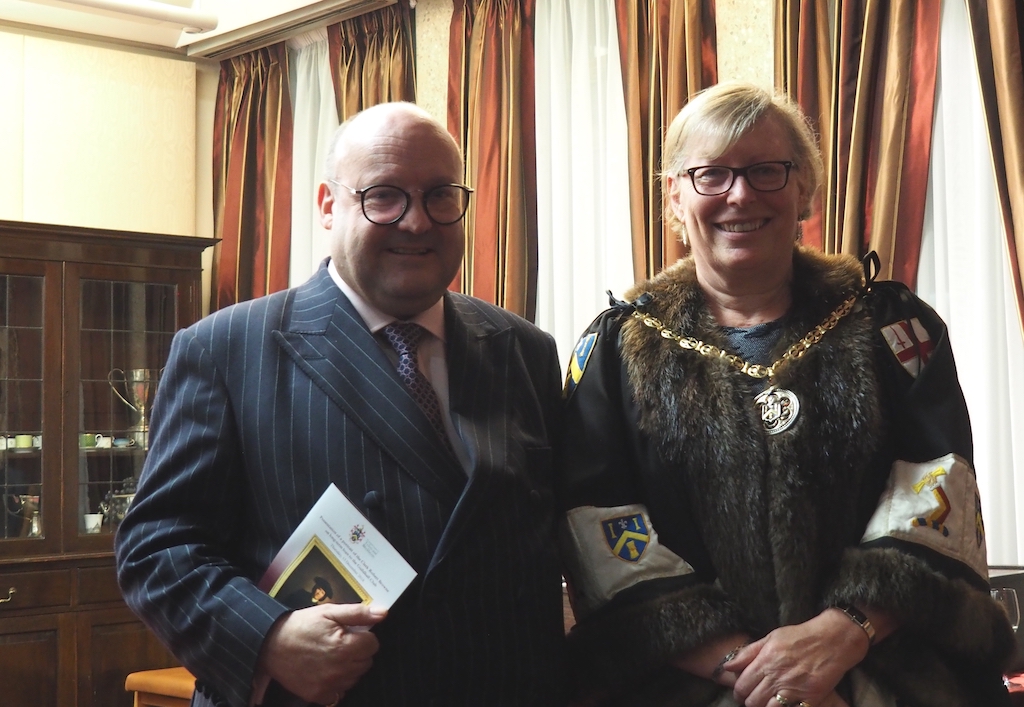 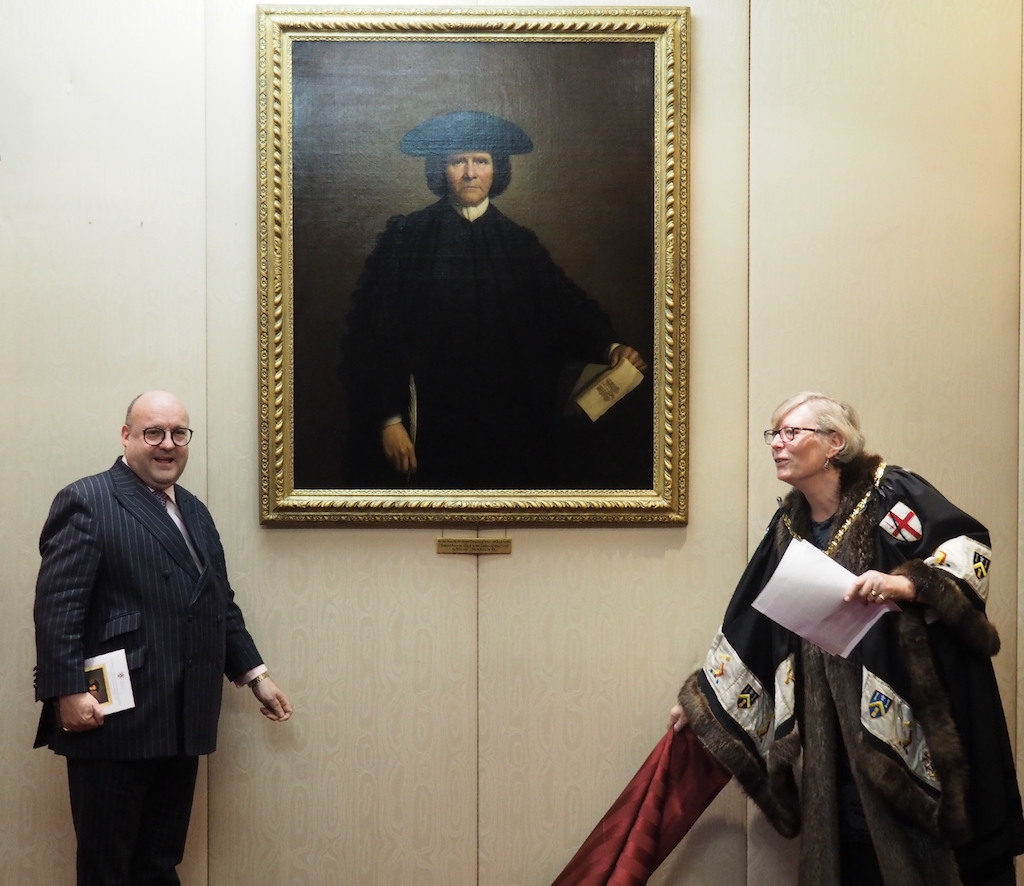 Careful consideration had to be given to the next part the portrait would play in the life of the Tylers and Bricklayers, and I was delighted that Guildhall Club agreed to display it on a long-term loan basis for all to enjoy for many years to come. Guildhall Committee Member, Chris Hayward accepted the portrait on behalf of the Club.

As the turn of the year tends to be a quiet time for Livery Companies, the Consort and I took a few weeks off to visit our family in Sydney, Australia.

When we plan these visits, we try to arrange a visit to a part of the country that we had not previously visited, and so it was we found ourselves in Melbourne for a few days in January with an invitation to dine with Liveryman Brenda Upton-Kemp.  Brenda spends six months of the year in Melbourne enjoying the Aussie summer, and six months in the UK enjoying the British summer.

Brenda is a wonderful and lavish hostess and we spent a most enjoyable evening chatting about her time as Mistress to Past Master Eric Upton-Kemp, and her life with second husband Paddy, who was well known and beloved by all in the Tylers and Bricklayers.

This was a wonderful occasion and will stay in our memories for many years to come.

Dining with the Beadles

Cook and Butler provided an excellent meal and after the meal had ended the ceremony of the Loving Cup took place.  David’s two granddaughters looked most bemused by the Ceremony and were helped through it by Past Master Cook! 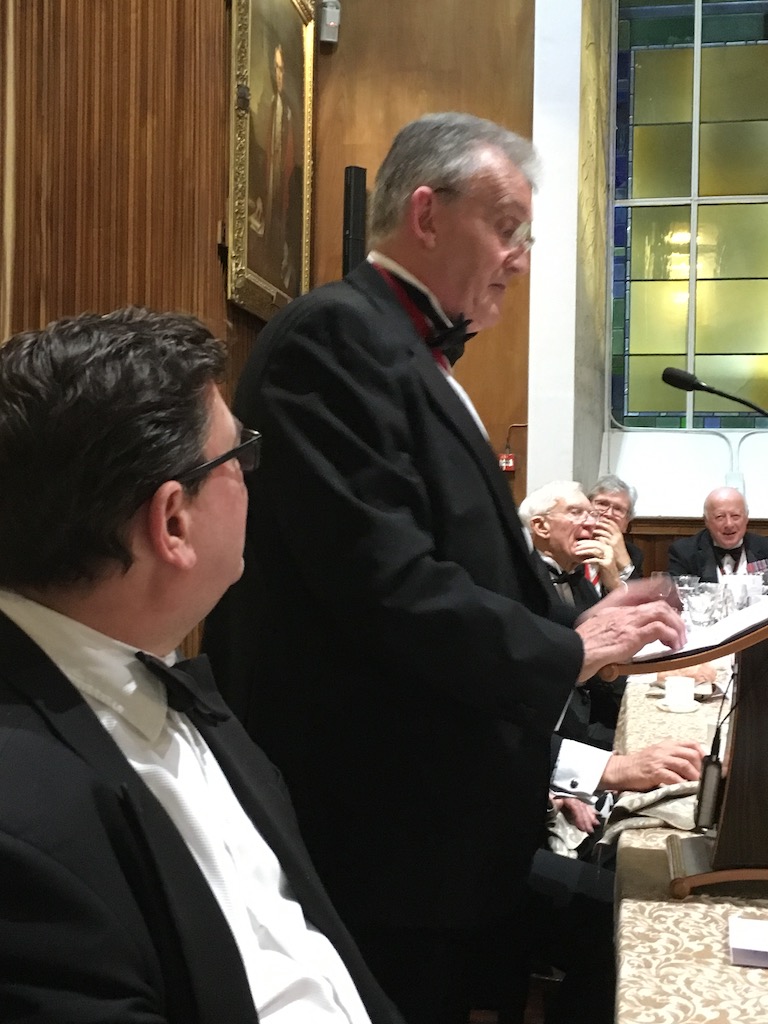 In his speech David admitted it was very strange sitting at the head of the table, instead of standing behind the principal host, and was most welcoming to all who attended the event. Past Master Tyler and Bricklayer Roger Westbrook responded to the Toast to the Guests with his usual aplomb regaling guests with stories from his diplomatic days comparing his life as Assistant to an Ambassador to a Beadle.

Principal Guest, Alderman Tim Hailes proposed the toast to the Guild and thanked them for all their work in the City.

All hail the Royal Engineers!

I had the honour of being invited to the inaugural Royal Engineer Awards at the Institute of Civil Engineers on 28thNovember.  The Awards celebrated the work of the Engineers and were split into several categories; individual endeavour, trade skills, academic achievements and support to operations.

As l listened to the citations, I was reminded of the work of this very special part of the Army which not only included construction, but also operations such as the nerve agent incident in Salisbury, ordinance disposal and rebuilding in the Caribbean post Hurricane Irma.

The highest Award of the evening was the Kitchener Award presented to Major Marsh, 39 Engineer Regiment for supporting his subordinates and being a role model during an 18-month continuous deployment to a remote part of the Falkland Islands.

The Award with the most intriguing name was the Windy Notchy Award, which commemorated the Royal Engineers Corps song.  The award itself was presented to the top instructor in the Corps by the USA Chief of Engineers.  I had to ask the young Captains who were sitting next to me why “windy notchy” and they were eventually coerced in to revealing the words and an explanation, which it turned out was thought to brought back to the UK by one of the RE Units which served in the Anglo-Boer War.

The dinner closed with a full rendition of the Windy Notchy Song by all the Sappers in the room and I shall remember the singing and the dinner with joy for many years to come.

In my working days the Paviours were always considered by some to be a competitor in the flooring industry, however to those of us in the know, it was simply a different element of the construction industry.

The dinner took place in the Livery Hall in the beautiful Drapers’ Hall and was a full house of some 240 guests, most of whom came from the paving industry.

The guest speaker was Ian Wilson, CEO of Alzheimer’s Research the Pavior’s charity who reminded all of the dreadful effects of this awful illness.  It is hoped that a cure will be found eventually.