The year 2018 has been a very special one for the Tylers and Bricklayers, being the 450th Anniversary of the signing of our Royal Charter by Her Majesty, Queen Elizabeth I, at Gorhambury in Hertfordshire.  It is also an extra special year because it is the year in which our Worshipful Company elected its first ever lady Master, in its 600 year (plus) history. So to celebrate these two wonderfully historic events, a special 450th Anniversary Dinner was held at Tallow Chandlers' Hall on Wednesday 31st October 2018. 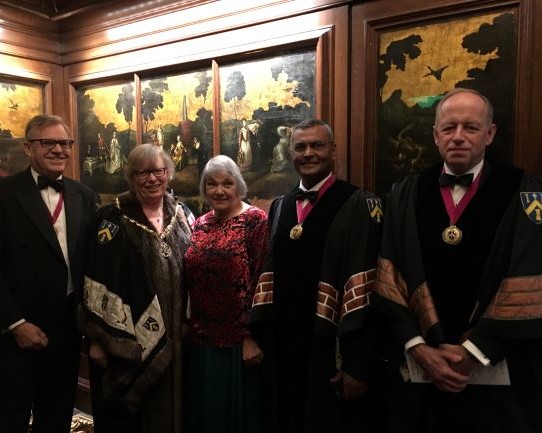 To mark the special occasion, the 450th Anniversary Commemorative Centrepiece was once again displayed proudly in all its glory for all the guests to appreciate. 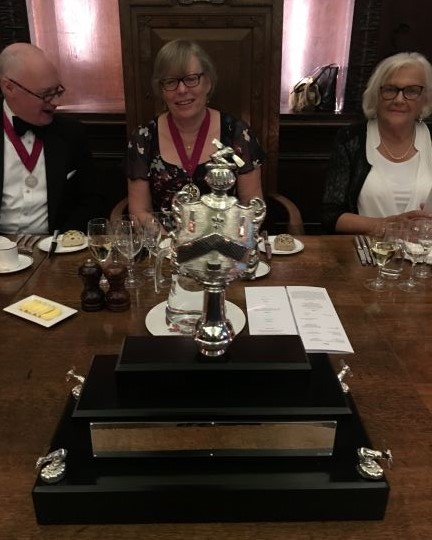 Introduced by the Beadle, The Master and Wardens greeted Liverymen, Freemen and guests in the splendid surroundings of Tallow Chandlers' Hall.  A wonderful Champagne reception was held prior to dinner being served, which gave everyone a chance to mingle and meet with friends old and new.

Following Grace by Court Assistant Charles Collins, the Master's first pleasurable task was to announce that Mrs Diana Christopher had been made a Companion of the Company and to present Diana with a Certificate and welcome her officially to Companionship. Diana thanked the Master for the honour bestowed upon her. The Master then made a short initial welcome to the guests. 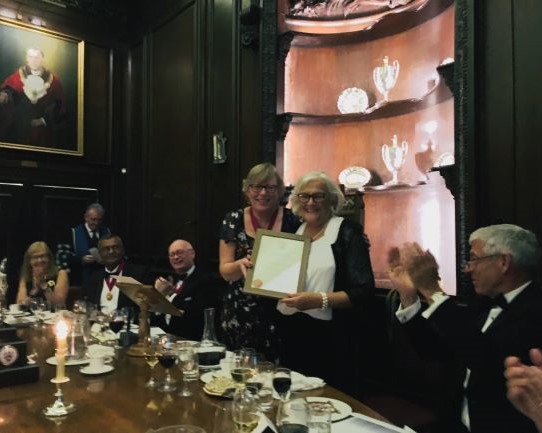 There followed a sumptuous four course dinner comprised of contemporary recipes for dishes featuring popular ingredients from the Elizabethan period to celebrate the importance of our Royal Charter granted by Elizabeth I in 1568. The meal was accompanied by fine wines and a vintage port from the Company Cellar. As always, the Tylers and Bricklayers Wine Committee had excelled in the excellent wines they had meticulously chosen for the night.

After the wonderful banquet, the Loving Cup was passed from person to person.      A longstanding tradition at City functions, the formal practice is for the person who pledges with the cup to stand and bow to their neighbour who, also standing, removes the cover with their right (dagger) hand.  Their other neighbour stands facing the opposite direction and guards the drinker’s back, a traditional act of protection which is said to owe its origin to an occasion in 978 in Corfe Castle when Elfrida treacherously arranged that King Edward the Martyr be stabbed in the back while drinking from a cup of wine. 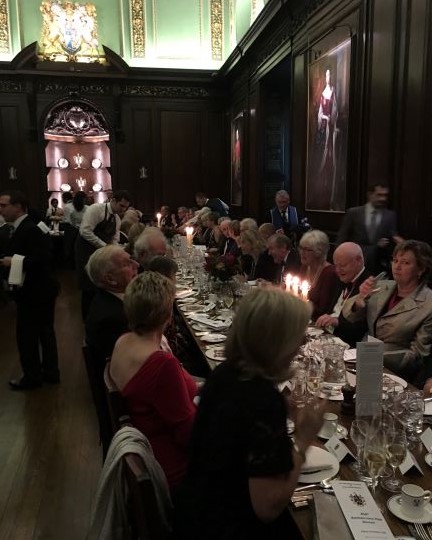 The Master made a warm welcome speech in which she thanked the guests for their attendance and made mention of her upcoming events and of her gratitude for the great honour bestowed on her as the first lady Master of the Worshipful Company of Tylers and Bricklayers.  This was followed by a response from Court Assistant Professor John Schofield who thanked the Master and congratulated her on being the first lady Master of the Company. Professor Schofield gave a short history of the wonderful Tallow Chandlers' Hall and its close association over the centuries with our Company. The site was bought by the Tallow Chandlers in 1476 and the current Hall, a Grade I listed building, was designed by Past Master Tyler and Bricklayer Captain John Caine in 1672 after the destruction of the original hall during the Great Fire of London. The Company's Coat of Arms can be seen displayed in an oriel window of this magnificent hall to commemorate the long standing relationship between the Tallow Chandlers and the Tylers and Bricklayers. 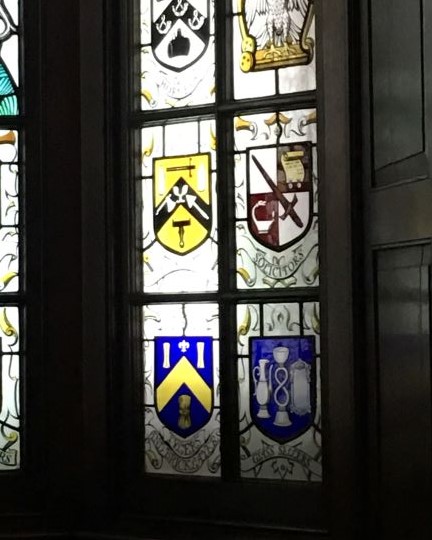 The Master closed the proceedings by thanking all the staff of the Tallow Chandlers and the caterers for their excellent service and she also expressed her thanks on behalf of all present to Liveryman Dr David Allen and Freeman Richard Townend for providing such fine music from the grand piano. Another very successful and thoroughly enjoyable Livery Dinner came to a close.