The Tylers’ and Bricklayers’ Annual Livery Dinner at Clothworkers’ Hall, 9 May 2019

Our annual Livery dinner was held at Clothworkers’ Hall on Thursday 9 May. The Clothworkers’ Company was formed by the merger of the Fullers and the Shearmen, groups specialising in the treatment and finishing of cloth. Their first charter was granted in 1528 by Henry VIII, but both had already been in existence for many years.

The current Hall, constructed between 1955 and 1958, is the sixth on the Mincing Lane site since 1472, the Company having lost halls to the Great Fire in 1666, dry rot in 1856 and the Luftwaffe in 1941. The Livery Hall is known for its recently commissioned tapestry tryptich designed by Chris Ofili entitled “The Caged Bird’s Song” in tones of green, purple, yellow and blue. This evening, co-ordinating flower displays were placed on each table!

The Clothworkers are number 12 of the “Great 12”, and a have a particularly noteworthy silver collection, ancient and modern, some of which was on display and in use during the evening for the ceremony of the Loving cup. The Clothworkers commission several new pieces of silver by competition each year, and have a wonderful display in their basement vaults. 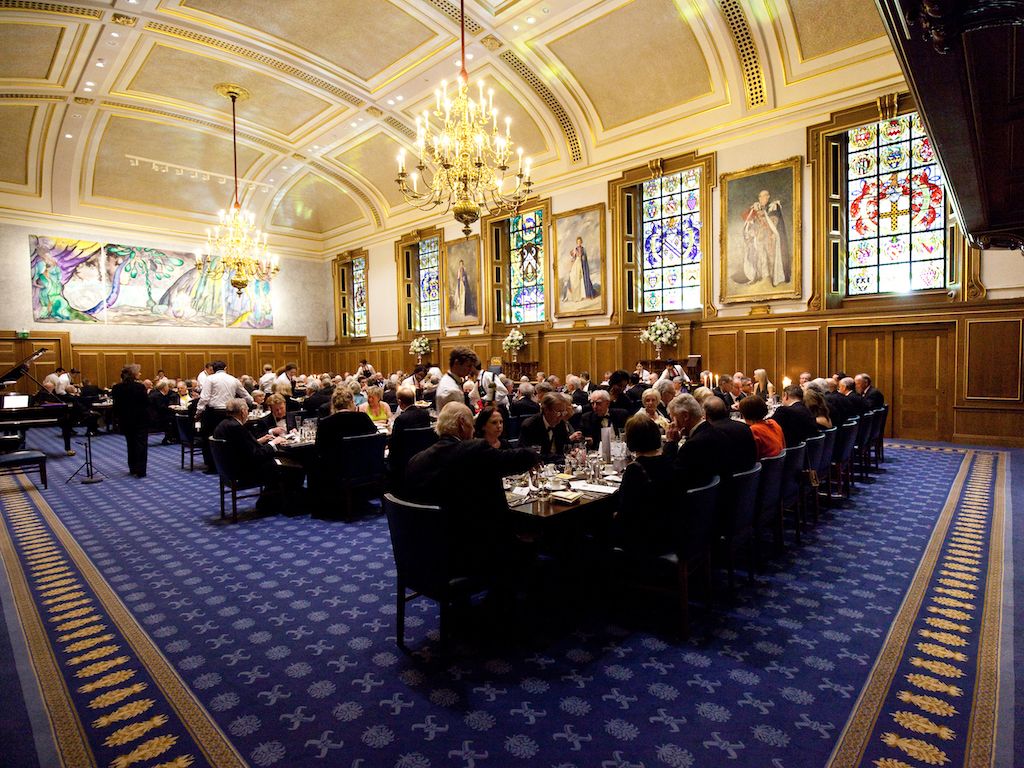 On Thursday, the Hall was filled with over 150 Liverymen, Freemen, Court Members and guests of our Worshipful Company. A champagne reception was followed by a superb meal of cured sea trout, fillet of beef with lobster ravioli, macerated strawberries and twice baked cheese souffle, with Chateau Argadens 2017, Chateau Lannesan 2010 and Grahams Port.

The Master proposed the traditional toasts to the Queen, the Royal Family and the Lord Mayor, Sheriffs and the City of London Corporation. Bidding us a warm welcome, she invited us to join her in a Loving Cup. 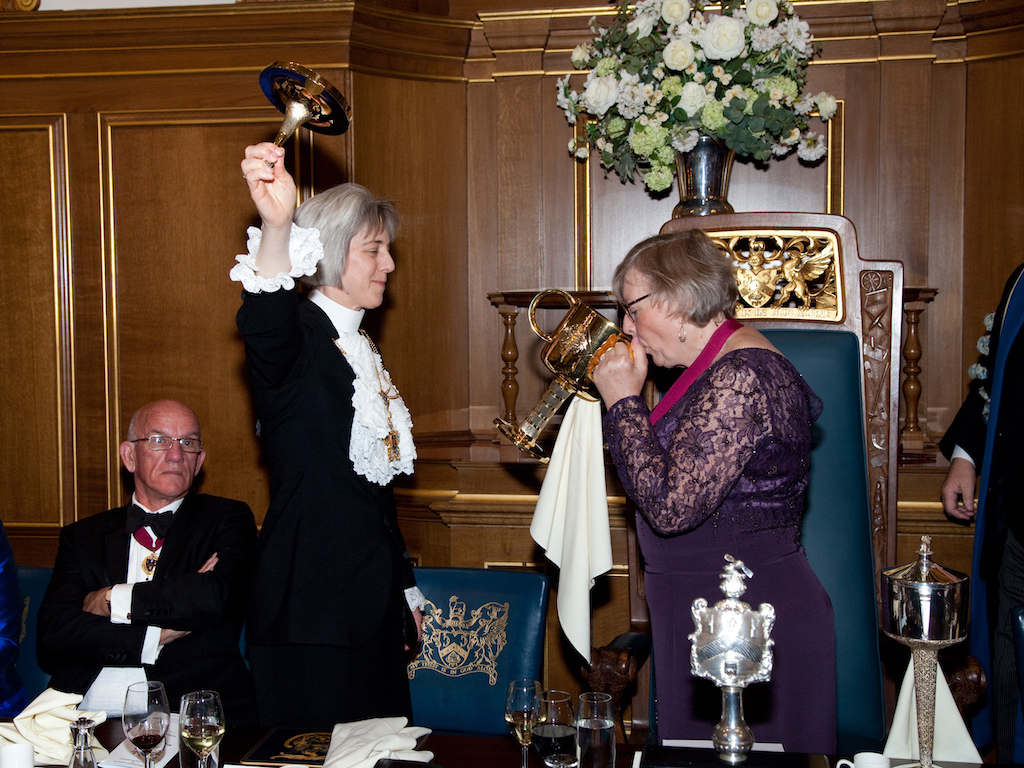 Court Assistant Mr Richard Uzupris welcomed our principal guests, Sheriff The Hon Liz Green and her husband Mr Peter Green; Miss Pippa Latham, Master Builders Merchant; Mr Barry Munday, Master Chartered Accountant and his wife Mrs Janet Munday; and the many other guests of the Master and other members of the Company. Closing, he proposed the toast to our guests.

On behalf of the guests, the Sheriff spoke of her experiences in the Old Bailey, and her charitable works. She is now often seen in her “Bailies”, the formal black breeches and white lace bib, and related that on one occasion at a charity event a small child said to her that she looked very old. In retrospect, Liz thinks she should not have asked the next question …“How old do you think I am?”, as she was less than delighted when the reply was 82!

The Sheriff lives with Peter at the Old Bailey for the year of her tenure, hosting regular lunches for judges and others, meeting many official visitors to the City, and they are both committed to supporting the Lord Mayor’s and the Sheriffs’ charities. Liz spoke of her determination to rehabilitate offenders after their release from prison, typically with £47 and a tent – she noted that perhaps it is not surprising that so many re-offend. Her appreciation for our charity of the year, Red Balloon, which supports those excluded from schools, was evident.

The Sheriff thanked the Master and the Company for the kind invitation, and proposed a toast to the Company - may it flourish root and branch forever!

The Master presented Past Master Peter Fuller, Father of the Company, and his wife Patricia with a “Diamond variety” rose to celebrate their diamond wedding anniversary. 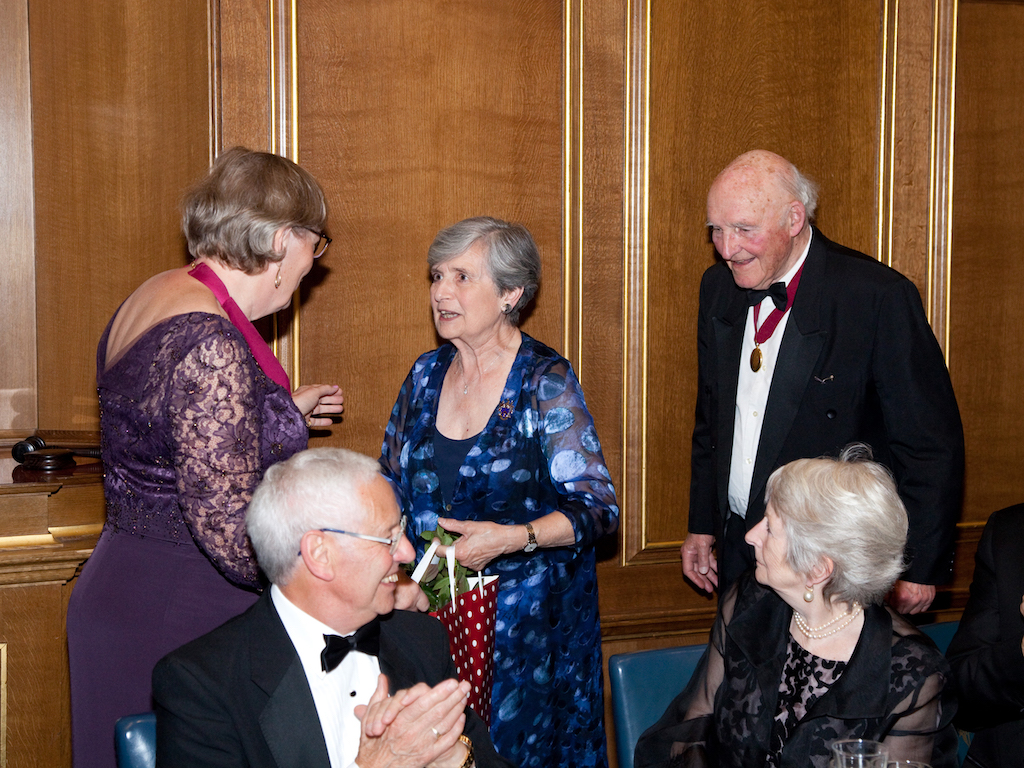 The evening was topped off by an excellent display of virtuoso classical guitar by a young guitarist, Michael Poll, from the Guildhall School of Music. He played several pieces with a South American theme chosen specifically by the Master to celebrate her time there, a novel musical interlude much enjoyed by the assembled Company.

With good humour and speedy action, the Master saved the day following the acting Beadle’s momentary lapse in concentration! The Master thanked the Master Clothworker, the catering and serving staff, and our learned Clerk, John Brooks, before closing the evening.

A wonderful, memorable event in a remarkable setting. 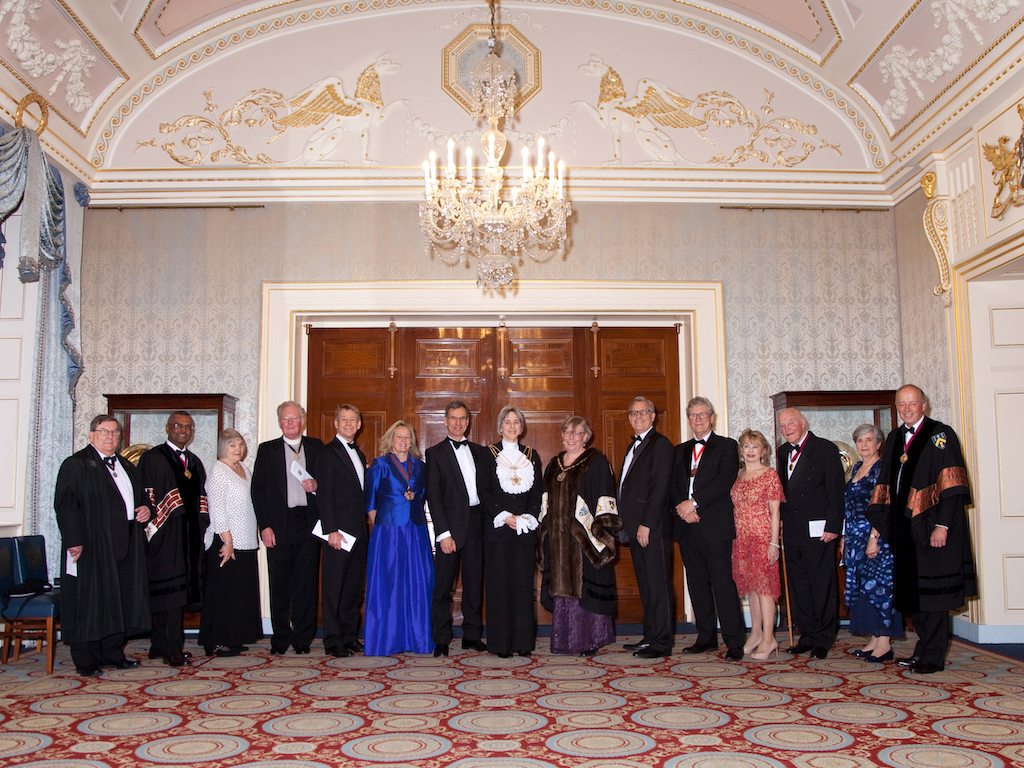