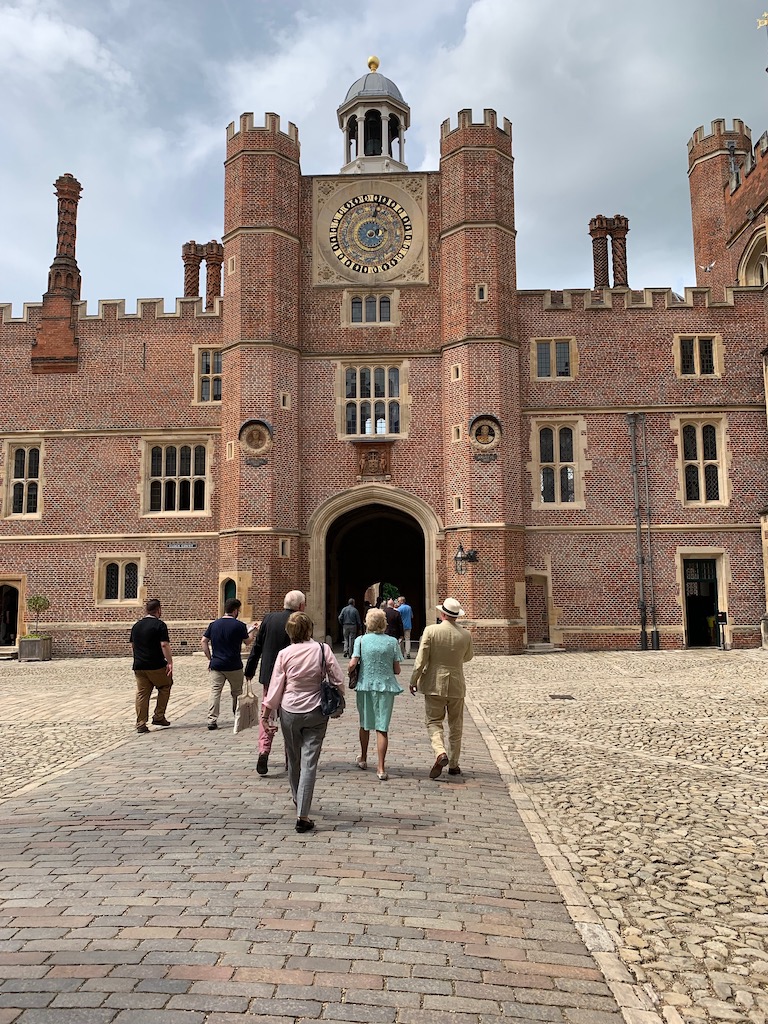 An intrepid group of Tylers and Bricklayers arrived at 10.30am at Hampton Court Palace to celebrate our Charter Day with a roof top tour of the Palace, organised by the Master and led by Liveryman and Master Craftsman Emma Simpson. Sadly, no Company barge was available to deliver us to the Palace by river, and the 26 members and guests came largely by train or car to congregate in the adjacent workshop complex.

After a brief introduction from Emma Simpson and a very welcome piece of cake and cup of tea, we accompanied curator Daniel Jackson into the Palace, through a locked door and up the 107 steps of a cantilevered staircase set in a darkened stairwell. 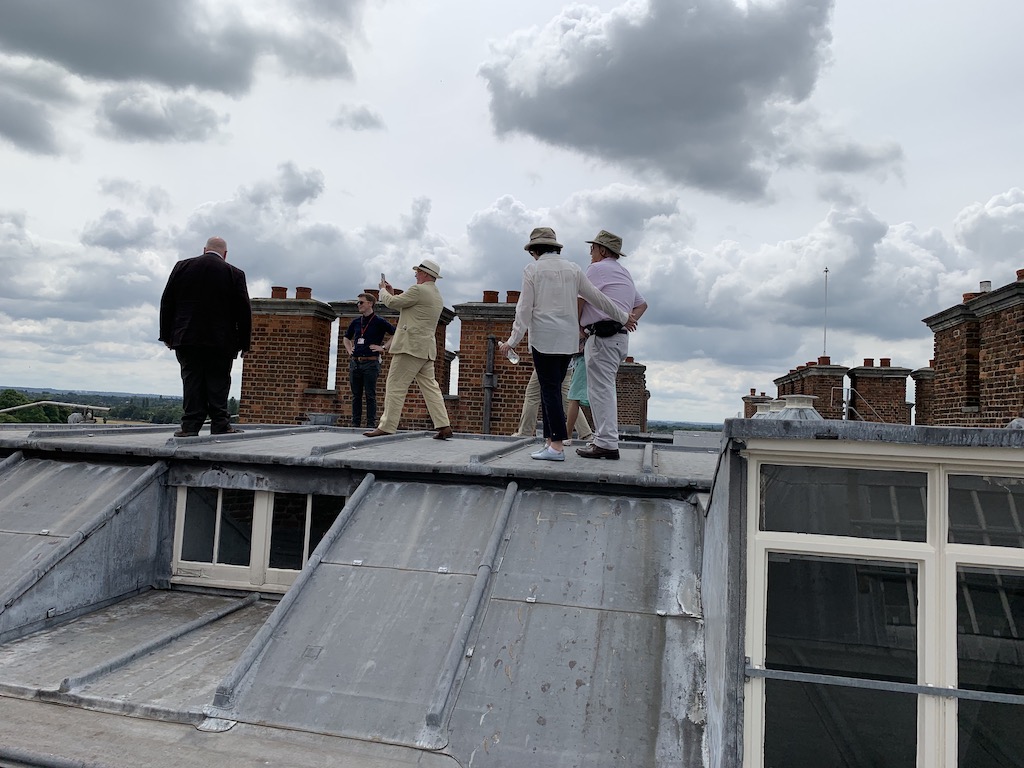 Somewhat breathless, and ducking to avoid the low beams, we emerged blinking onto the flat Palace roof which is covered by lead sheeting and criss-crossed by metal walkways. The rooftop allows spectacular views in all directions, and luckily the weather was dry or such an adventure might have proved impossible. 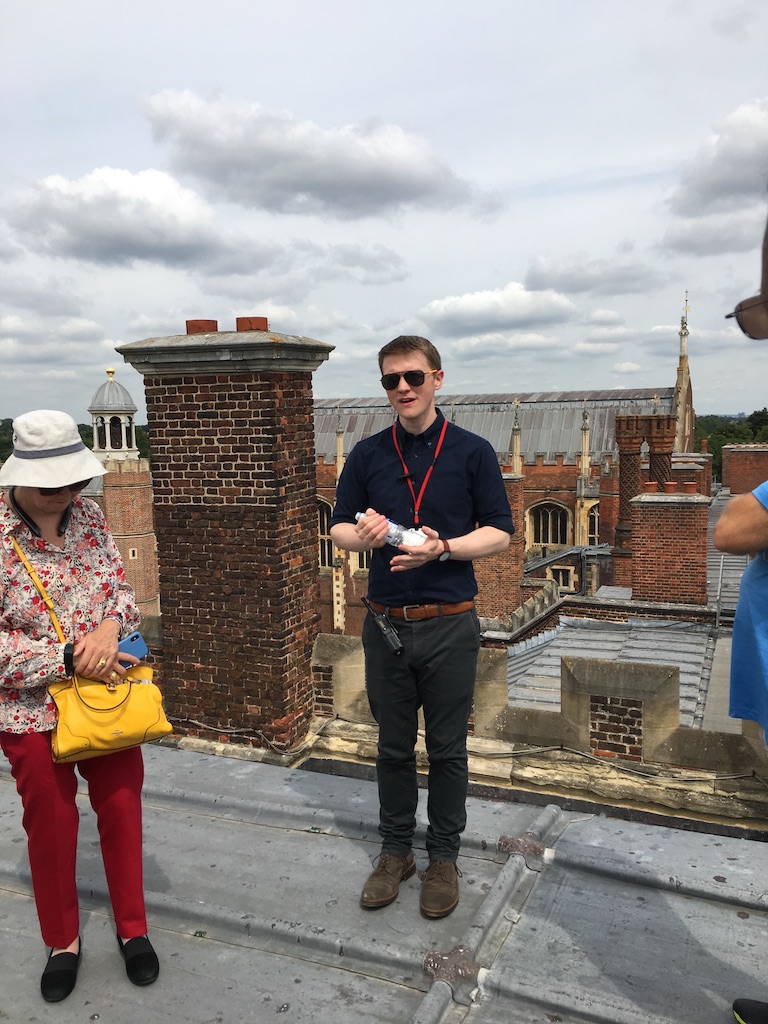 Standing rather closer to the edge than many of us felt entirely comfortable, Daniel carefully related the history of the Palace, which is built on the site of a much smaller dwelling listed in the Domesday book. It was rebuilt and then extended by the royally-supported Cardinal Wolsey to provide lavish hospitality for visiting dignitaries from both Royal Court and Catholic Church. Falling from favour after failing to negotiate an annulment of King Henry VIII’smarriage to Catherine of Aragon, Wolsey gave the palace to the King and retreated to the North to continue his ecclesiastical duties as Archbishop of York.

Further extensions to the Palace were designed by Sir Christopher Wren and built by his trusted foreman William Talman, but undertaken at such breakneck speed that not everything fitted quite as it should.

Following a devastating fire in 1986, conservation required enormous effort and financial support, and which was the moving force behind the formation of Historic Royal Palaces charity which administers the Palace today. The majority of the fire damaged timber was re-used, and necessitated the application of a lot of beeswax – in fact the wax would have taken 1.67 million bees a year to make, according to Daniel. 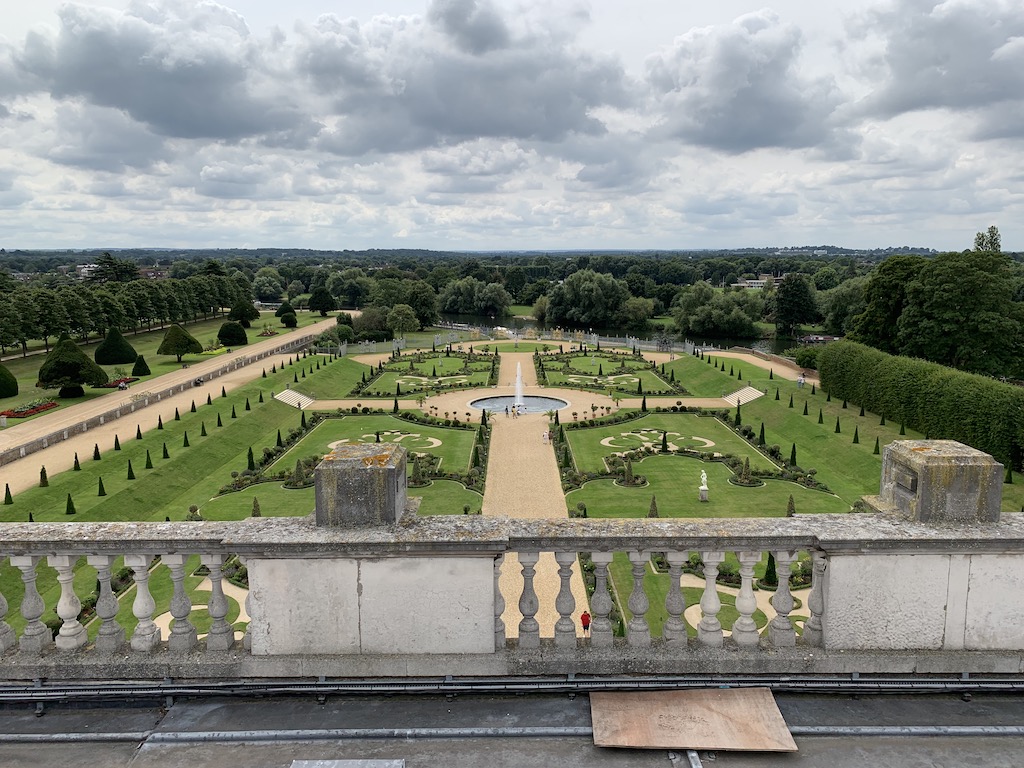 The gardens are a real spectacle, due partly to the involvement of Capability Brown who lived on the Palace estate, and have been extensively restored in recent years under the direction of Todd Longstaffe Gowan. 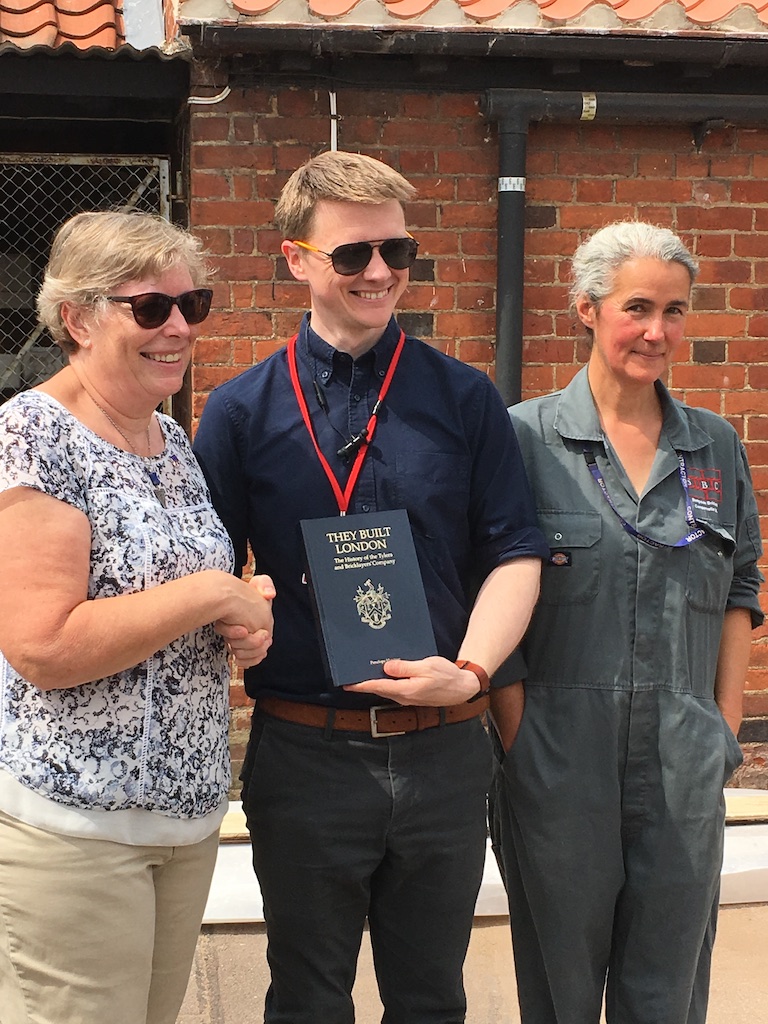 Back on terra firma, the Master thanked Daniel for his most informative tour, and presented him with a gift of the Company history “They Built London”.

After lunch in the Tiltyard café, we enjoyed a tour of the interior of the Palace led by guide Sarah Slater, including the kitchens where meat was roasting on a spit, and the cellars where very large qualities of beer, wines and spirits were stored. 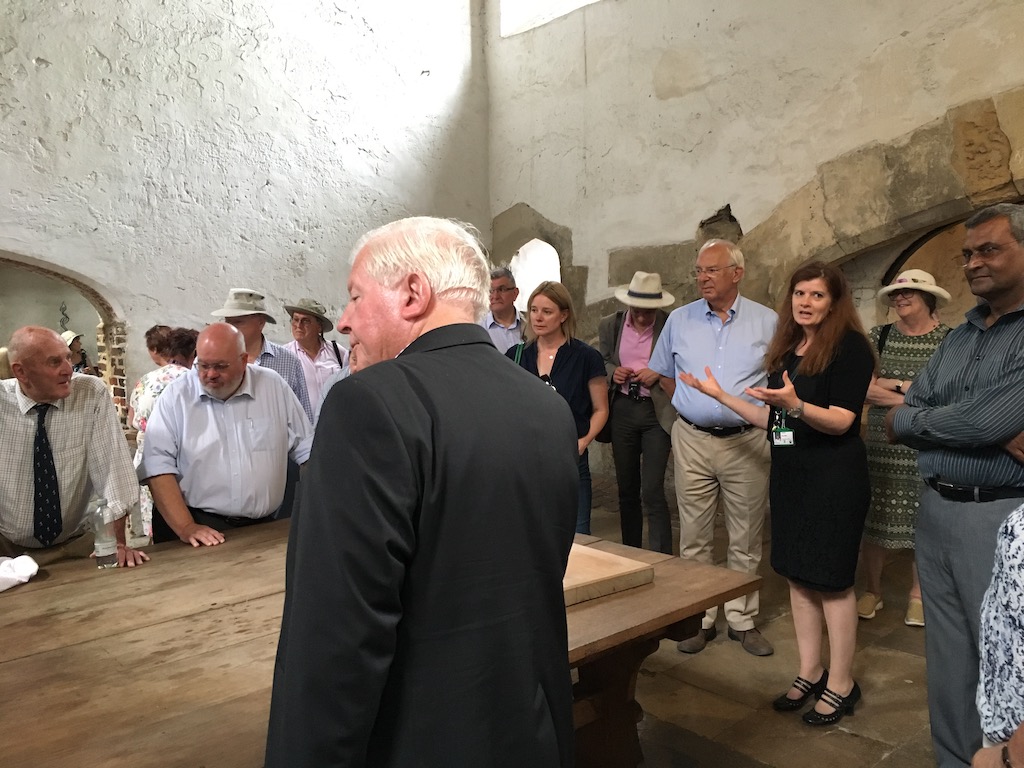 The Great Hall with its fantastic stained-glass windows also contains the series of Brussels tapestries depicting the “Story of Abraham”, some of the most valuable possessions in the Royal Collection. The Mantegna “Triumph of Caesar” paintings and the Great Vine, supposedly the largest in Europe, were also seen by many earlier in the day. 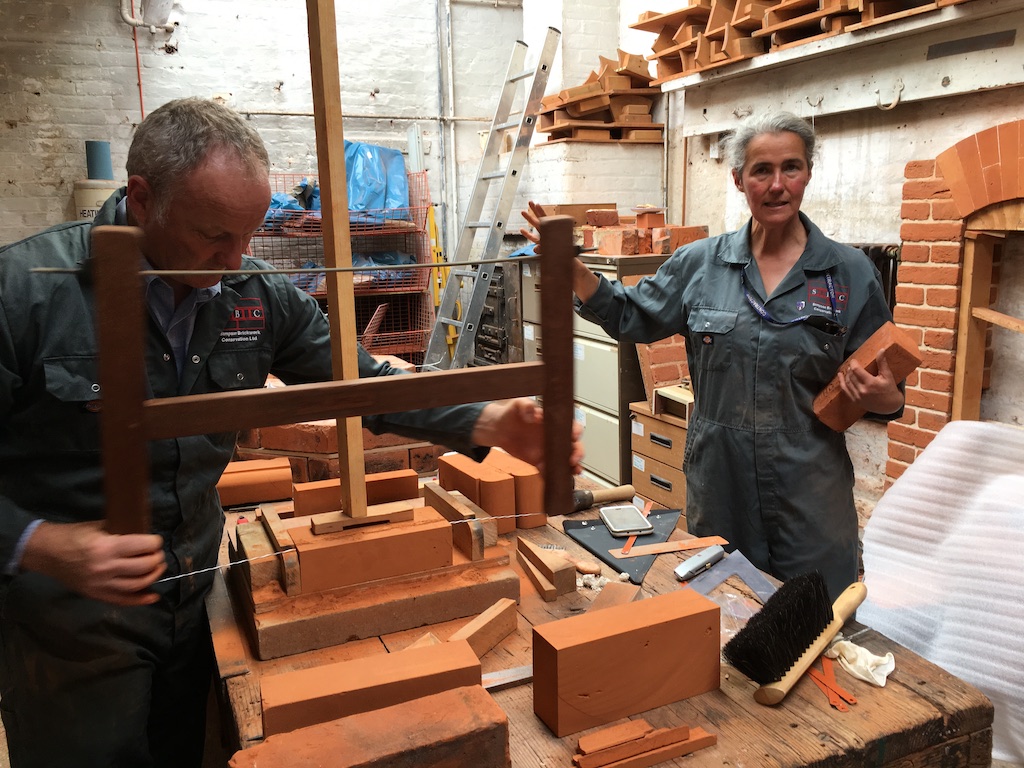 After the tour, we re-joined Emma Simpson for a demonstration of specialist brickwork techniques. Emma was ably assisted by her colleagues Lynn, Neil and Matt who explained in great detail the complexity of hand cutting and shaping the “rubbers” after smoothing their surfaces on completely flat circular milling stones.

The meticulously manufactured bricks are assembled in the workshop prior to rebuilding the chimneys from scaffolds on the Palace roof. Whilst they are so characteristic of the Tudor Palace’s skyline, the chimneys are mostly of Victorian construction and sadly no Tudor chimneys remain.

The Master thanked Emma and her colleagues for their hospitality and the fascinating display of specialist brickwork, before presenting her with one of the first of a series of lapel badges to be worn by members of the Company.