It is a welcome tradition that members of our Livery dine without guests after Common Hall (the occasion that comes closest to being our AGM). As in recent years, we gathered in Cutlers’ Hall, located not far from St Paul’s, whose primarily wooden interior, with none of the gilded marble pomp of most Halls, has a slightly more relaxed and welcoming atmosphere than many others. There are no speeches and there is no pre-determined seating plan, so members don’t know with whom they will be dining until the start of the meal. The meal itself was delicious, prepared in-house and (probably because of that) closer in style to “good home cooking” than the usual City tradition, and accompanied by two excellent clarets that were the bin-ends of our Wine Committee’s best choices for previous more formal dinners. The bins were duly ended by the finish of the meal! 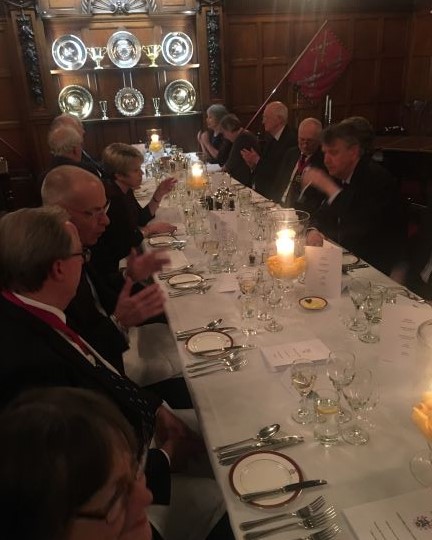 Having despatched the formal business in good time, and having indulged in some useful and open discussion of matters directly affecting the Company, those dining were clearly in the mood for conversation ranging over a wide variety of topics, many of them quite unconnected to tiling or bricklaying but always underpinned by well-informed opinion and experience. Our membership includes people from a variety of professional backgrounds in addition to our own crafts, and the breadth of topics was refreshingly wide, including (at my end of the table) medical ethics, legal processes, current fashions among the well-dressed City businessman and the welcome growth in the number of lady Masters within the City. The conversation was lively, to say the least, and I assumed that we represented the undisputed noisy end of the table: but when there was at one point an uncharacteristic and short-lived lull in our conversation, it was clear that the rest of the table was every bit as animated.

The one disappointment was that only around 40 of our number were present. The atmosphere of these informal members-only dinners, held only once each year, is quite different from others in our annual cycle and those who have not previously attended are encouraged to come next year: they will undoubtedly enjoy the experience.