Our friend the Revd Jeremy Crossley, Rector of St Margaret Lothbury, perhaps summed itup best when, in welcoming the new Master and Wardens together with members of the Company and guests, he said how good it was to see us back in his church. 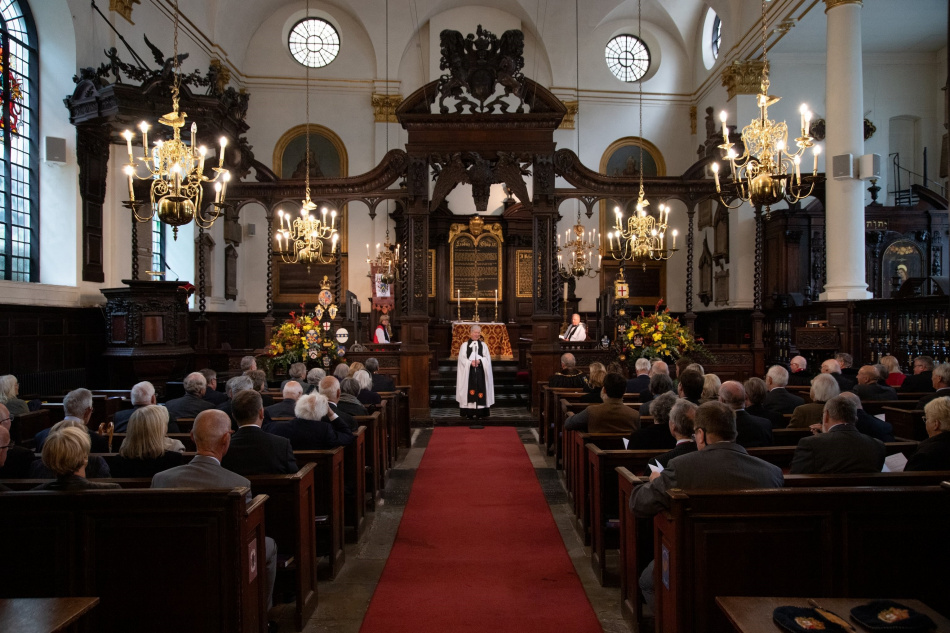 Jeremy pointed out that, whilst it had been two years since our last Annual Service, it was three years since he had been able to welcome us in person. In 2019 he had been in attendance on the Lord Mayor at the time of our service.

But how good to be back in ‘our’ beautiful church with its stained-glass window depicting our coat of arms and the wonderful singing provided by the Lothbury Singers choir, directed by our very own Honorary Freeman, Richard Townend.

And this year our service was graced not only by Jeremy and our Honorary Chaplain, the Revd John Cook, but by the Right Revd and Right Hon Dame Sarah Mullally DBE, the Bishop of London.

But, as always, Installation Day started earlier at Carpenters’ Hall with a meeting of the Court that, although the shortest in our Company year, is also the most significant. For it is at this meeting that the Court formally confirms the new Master and Wardens for the ‘ensuing’ year and installs new members of the Court. So, on the last Thursday of September 2021 (a week earlier than usual) Simon Martin was announced as the new Master, John Schofield the new Upper Warden and Christopher Causer the new Renter Warden.

The Court also welcomed and installed Liveryman David Williams as a Court Assistant and Liveryman Diana Melzer as a Steward. A very happy ‘first’ for the Company was the admittance of our first presentee to Christ’s Hospital School, Onyinye Udokporo, as a Freeman of the Company following her ‘release’ from Apprentice Indenture.

During the Court Meeting the Master’s Consort was joined for refreshments by the Master Elect’s wife Jenny Martin and wives/partners of Court Members and the Consort’s badge was handed over to Jenny by Maureen Saminaden.

As the traditional procession to the church formed up many umbrellas were being held, evidence of the unsettled nature of the weather. But they were happily not needed either during the formal walk to St Margaret Lothbury or on the less formal stroll back.

Moving the installation ceremony from a meeting of the Court, open only to members of the Company, to the church only happened in 2012. Over the several years since then the ceremony has been refined and improved and Simon Martin’s initiative this year to provide everyone with a booklet setting out the ceremony including the oaths of office is to be applauded. That and his other initiative for the incoming Master and Renter Warden to read their own oaths of office raised the event to a whole new level. The new Master is to be congratulated for this.

The opening chords of ‘Praise, my soul, the King of Heaven’ and the singing of the choir announced the start of the Annual Service. This follows a familiar pattern each year varied mainly by the incoming Master’s choice of hymns and, with the help of Richard Townend, the choral music. Always superb, this year’s choice and rendition of introit and anthems matched the best. One of the anthems was so musically difficult that Richard had to conduct the Lothbury Singers, leaving the organ accompaniment to be played by his friend John Keys from Nottingham University.

The highlight of the service was the address by the Bishop of London. Drawing on Psalm 127, the lesson read by the Master, and the words of William Dunbar and William Blake in their poems about London, the Bishop drew a parallel between London’s 1665 Plague outbreak and the Coronavirus pandemic. Both had an effect on the City and its people, particularly the less fortunate and those caring for others. With life beginning to return to normal the Bishop challenged us to consider what lessons we have learned and what kind of city we are going to build back.

The playing of the Tylers and Bricklayers’ Company March with the Clergy leading the Master and Wardens from the Church marked the end of the Annual Service and the return to Carpenters’ Hall. 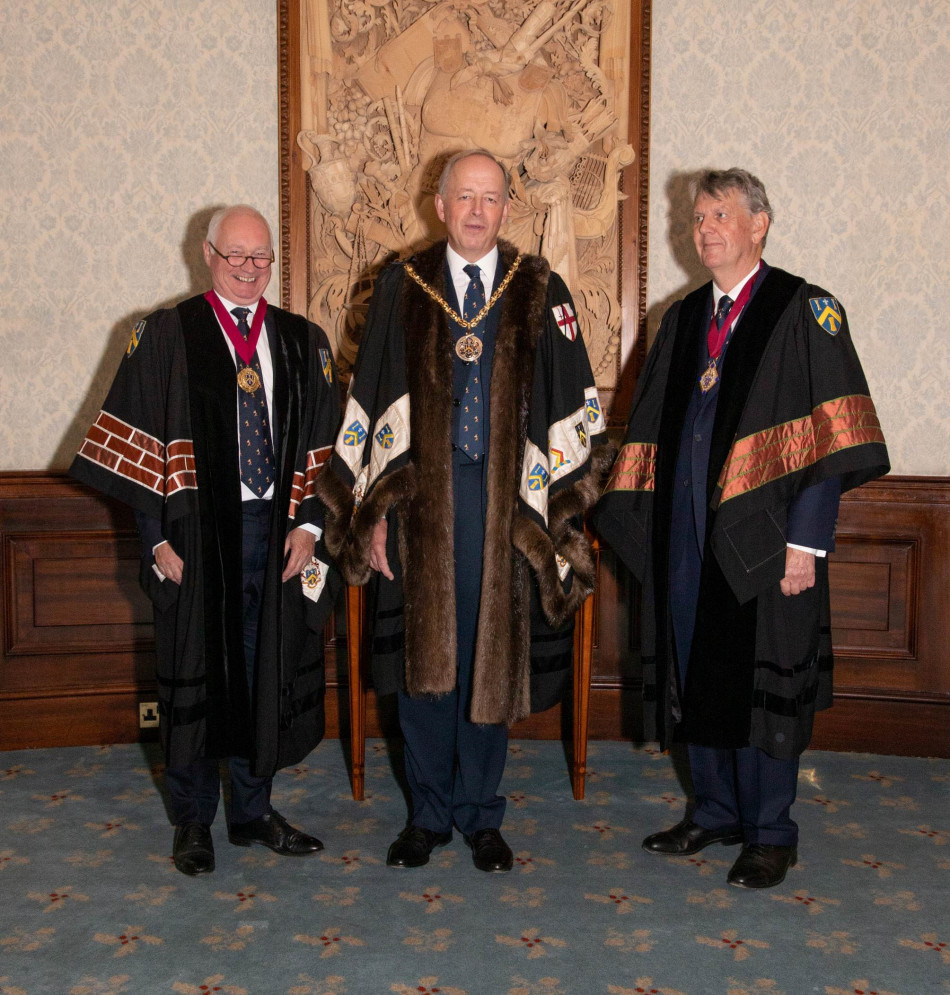 For me one of the best moments of Installation Day is greeting the new incumbent for the first time as Master. At the top of the stairs at the front of the reception line came this opportunity. The good fellowship of the new Master, his Wardens and their partners was immediately obvious from their welcome to everyone.

And so, after a champagne reception, to a luncheon with excellent food and good wine - all in the best traditions of the fellowship and hospitality of the Tylers and Bricklayers. 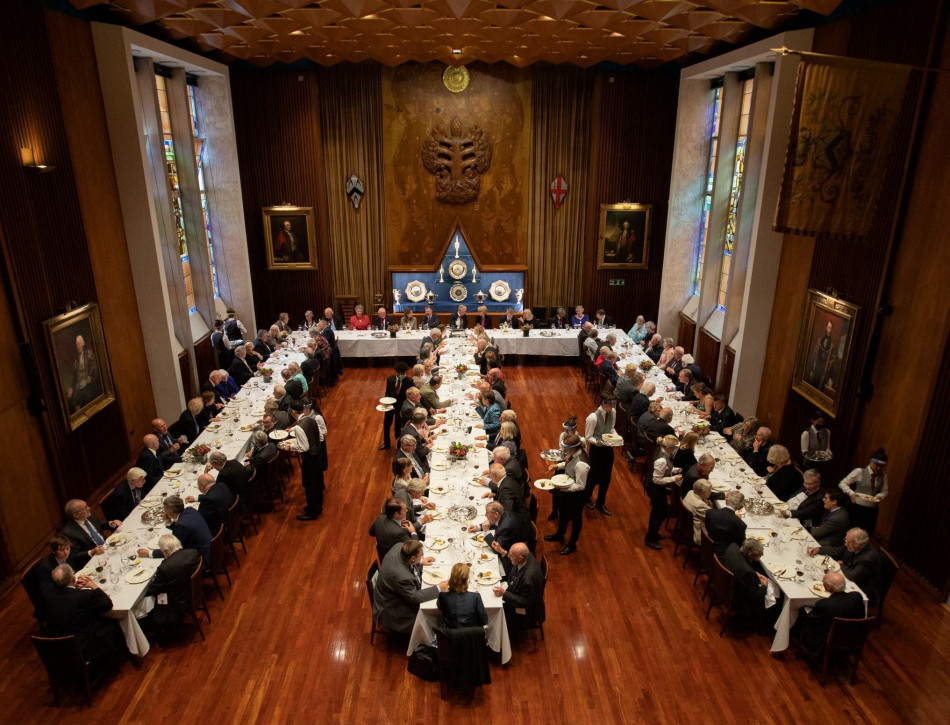 The singing of Grace at the end of the service of food may be something of a challenge to those unaccustomed with this tradition but with Richard Townend’s accompaniment on the piano members and guests alike performed it well, if not with great distinction! Following the loyal toast and those to the Royal Family and the Lord Mayor, Court Assistant and Renter Warden-in-Nomination Jenny Rolls elegantly proposed the Toast to the Guests. Jenny highlighted Dame Sarah Mullally’s career in nursing, including as England’s Chief Nursing Officer before entering the church. She also welcomed our Principal Guest Rt Hon David Gauke, a former member of the Cabinet who had served in the Treasury under David Cameron and as Lord Chancellor under Theresa May. Before entering Parliament in 2005 he had been a colleague of the Master at Macfarlanes, returning to the firm after leaving Parliament in 2019. 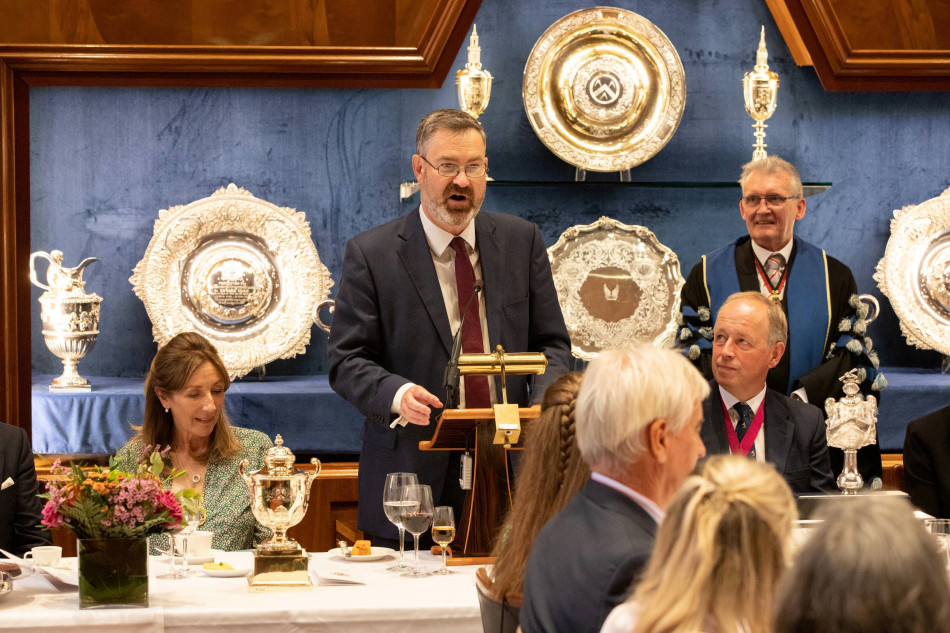 David delivered an amusing anecdotal response to the toast that showed, perhaps, how informed, interesting and entertaining politicians and former politicians can be when free of the constraints of office and defending political positions and policies.

The Junior Liveryman, Martin Reading, excellently proposed the toast to the Company including the all-important final words ‘and Good Health to the Master’. In response the Master talked of his plans for the year ahead including, most topically, the Christ’s Hospital Appeal to fund the Company to support a new presentee at the School. Onyinye’s successes both at Christ’s Hospital and since leaving the school demonstrated what a difference the Company can make to the life of a young person. Over the coming twelve months the Company will continue to support its crafts including through our annual awards. The Master paid tribute to his predecessor Michel Saminaden who, with his partner Maureen, had suffered many disappointments and cancelled events due to the on-going pandemic. Serving two years in office, Michel had nevertheless provided the Company great leadership through difficult times. 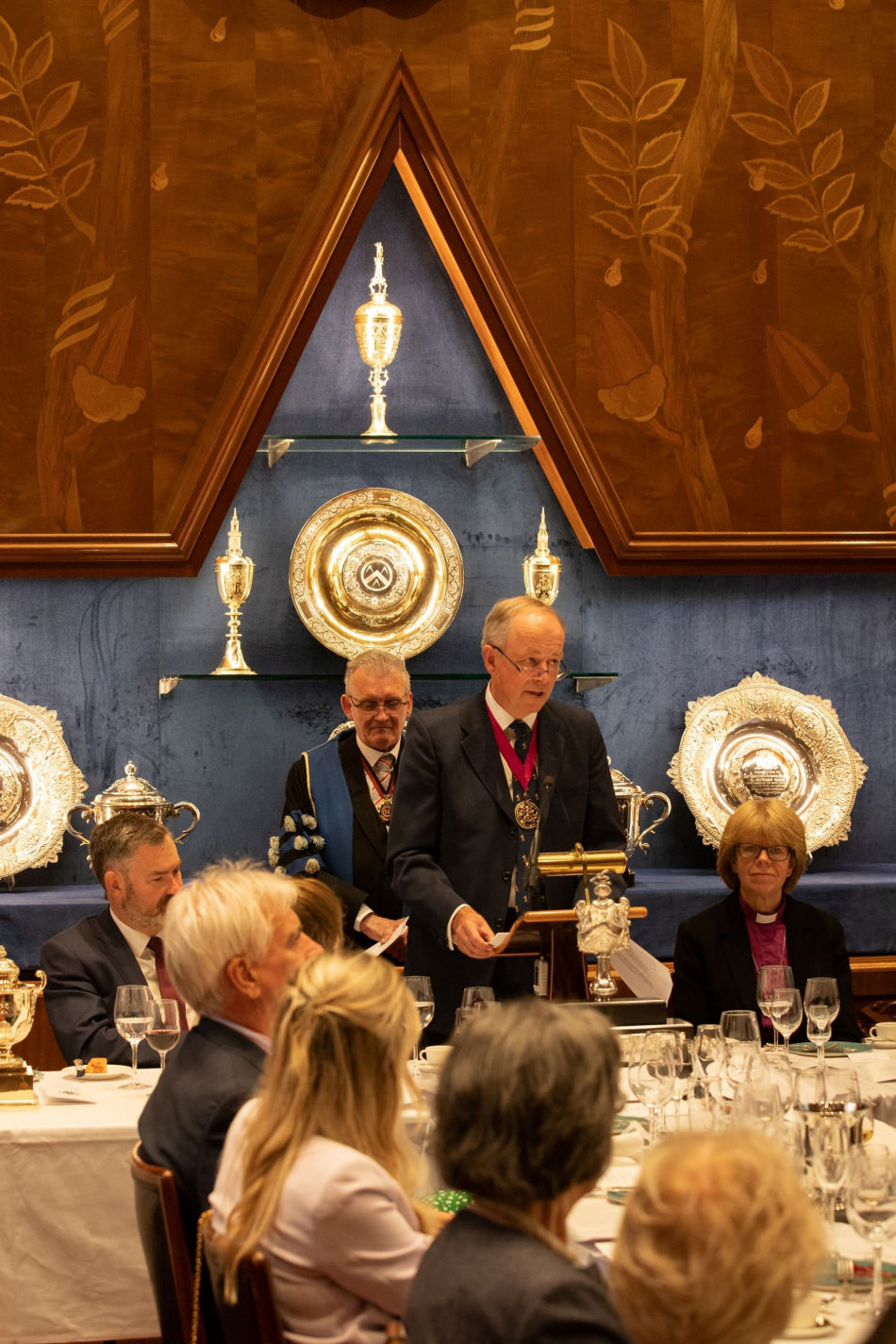 The traditional slow handclap accompanying the procession of the Master, Wardens and principal guests out of the dining hall marked the end the celebrations. After the pandemic caused hiatus we had been able to get back to the customary way of doing things whilst, with the installation of a new Master and Wardens, we could look forward to the future.