Over 30 members of the Company and their partners joined the Master by Zoom videoconferencing to enjoy a guided tour of Smithfield market and adjacent locations of interest. The Master had spent time walking through Smithfield on his way to work and to City events. Following the announcement of the closure of Smithfield market and its re-location to Dagenham, together with the Billingsgate fish market and New Spitalfields fruit and flower markets, he felt it was a good time to look at this area in greater detail. 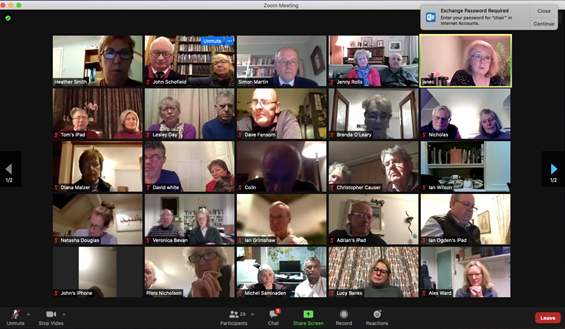 We were guided by Jane Copland, a City of London Green Badge guide with a special interest in this area, and a member of the group “Six in the City”. Using a combination of modern and ancient maps, video footage and photographs, Jane led us on a fascinating voyage of discovery. Landmark buildings were linked to their important roles in the history of the City, and there was a definite focus on brickwork and ceramic tiles. 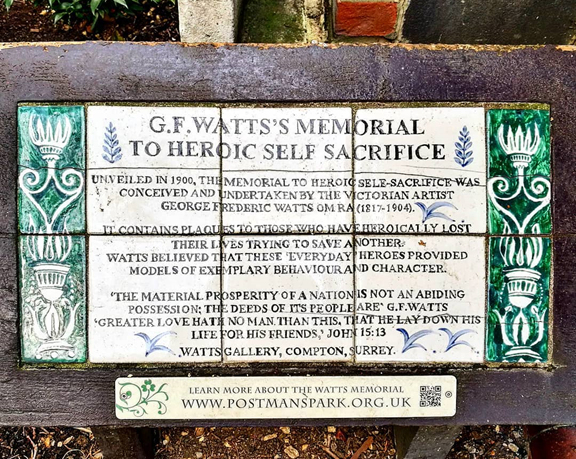 We started our journey in the wonderful hidden garden, Postman’ Park, close to the old post office and often used as a lunch venue for employees. The Victorian artist George Frederick Watts created a remarkable memorial to heroic self-sacrifice, to commemorate ordinary people, or “Everyday heroes”, who had died saving the lives of others and who might otherwise have been forgotten. The memorial was unveiled in an unfinished state in 1900 and consists of a 50-foot wooden loggia sheltering a wall with space for 120 ceramic memorial tiles, intended to be designed and made by William De Morgan. At the time of opening, only four of these memorial tiles were in place. After Watts’ death in 1904, his widow Mary took over the running of the project, and Royal Doulton tiles were later introduced. No new tiles were placed between 1931 and 2009, when, after a two year campaign, a 54th ceramic “tablet” was added. This commemorates print technician Leigh Pitt, aged 30, who saved a drowning boy from the canal at Thamesmead in 2007, but was unable to save himself. 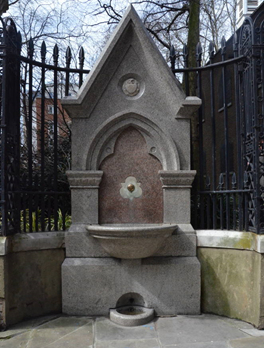 Leaving Postman’s park, we stopped at the grade II listed Gothic drinking fountain at the east end. The inscription reads “James & Mary Ann Ward late of Aldersgate and Islington Erected by their daughters 1876”. It was particularly fitting that Past Master Nicholas Ward and his daughters, Liverymen Natasha and Alexandra Ward, direct descendants of the donors, were all present on the call.

Next, we moved to one of the City’s oldest churches, St Bartholomew the Great, founded as an Augustinian Priory in 1123. Amongst many events in its long history, this was the site of the murder of Wat Tyler in 1381 by William Walworth, Lord Major of London, on behalf of King Richard. Today it serves as a parish church and a popular film location, starring in Four Weddings and a Funeral, and Shakespeare in Love, amongst many more. 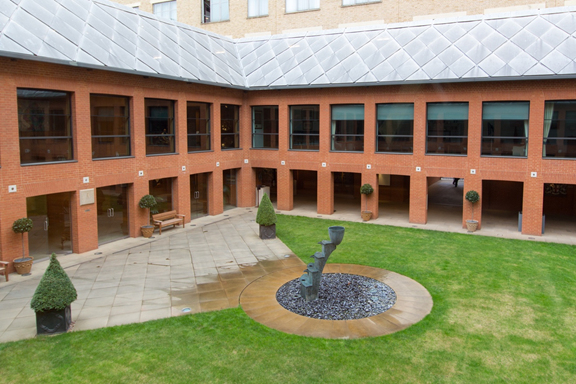 Then, to one of the most modern of Livery Halls – Haberdashers’ Hall, designed by architect Michael Hopkins, incorporating exceptionally fine brickwork, and opened by the Queen in 2002. This is built around a quadrangle reminding us of a medieval layout, with its extraordinary Livery hall reached by a spectacular circular brick lined turret staircase. A much earlier panelled room from the original hall has been cleverly integrated into the modern design. This hall is a firm favourite of the Master, and will be the venue for our Annual Guest Dinner in May 2022.

Our next stop was Cloth Fair, one of the surviving mediaeval streets of London, where at number 41/21 there is the oldest house remaining in the City of London. The nearby Hand and Shears Pub played an important part in the infamous Bartholomew Fair, a popular retreat for Londoners that opened annually for four days each summer from the 12th to the 19th century. The fair attracted every class of people in London and was the type of place where one could buy the best meat in town, while also watching a public execution. It was immortalised in the controversial Jacobean comedy “Bartholomew Fair” by our very own Ben Jonson. 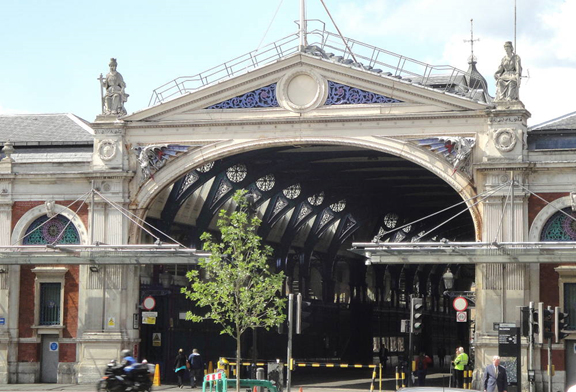 Then to the huge Victorian edifice of Smithfield Market, created by Horace Jones, which has been the City’s principal wholesale meat market since 1868. It replaced the unsanitary “live” meat market utilizing the new underground railway and better road network to bring in meat products for sale. 150 years later, the market is to be relocated to Dagenham, and there are ambitious plans to convert the existing Smithfield buildings into a mixed use commercial and cultural venue, opening up the basement area to allow additional usable space. Fortunately, the huge dragons on the façade, which Jane regards as the best in the city, will remain. 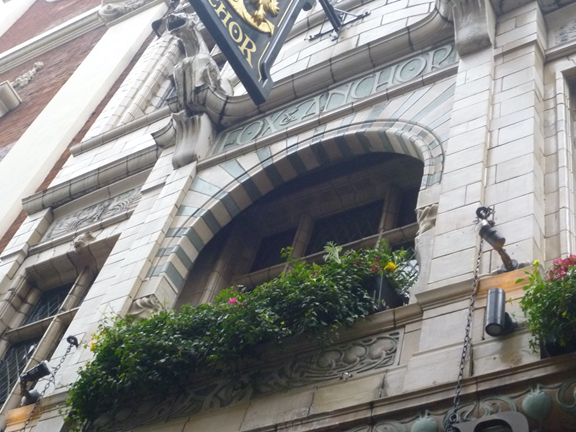 We admired the spectacular art deco tiled facade of the Fox and Anchor Pub, famous for its “Smithfields breakfasts” before going on to the Charterhouse, a former Carthusian monastery and present-day alms-house, whose collection of buildings date back to the 14th century. The 40 “Brothers” now include a number of women, and Ann Kenrick OBE is the first female Master in the Charterhouse’s 400 year history.

Finally, to the Barbican complex, the “brutalist” 1960 housing project by architects Chamberlin, Powell and Bon, which literally rose from the ashes of the second World War in an area which was heavily bombed in the Blitz. The name of the Barbican comes from the Low Latin word 'Barbecana' which referred to a fortified outpost or gateway, the
outer defence of a city or castle, or any tower situated over a gate or bridge which was used for defence purposes. Designed to provide housing for those working in the City of London, with open space reminiscent of an Italian piazza, its idiosyncratic architecture is loved by some and loathed by others. The carefully selected “hammered” finish of the concrete, designed to aid water run-off and avoid staining, resulted in repetitive strain injury in many of the Italian workmen who hand fashioned the concrete wall and ceiling surfaces. The Barbican Centre, with its subterranean performance spaces and stages came a little later, with the ingeniously fly towers concealed within the buildings above.

After a few insightful questions from the audience, the Master thanked Jane Copland for a superb tour of this most interesting part of the city. A general discussion ensued, and the Clerk remarked that it was very pleasing to see members joining from overseas, including Philip Collins from Brussels. The Master explained that he hoped to continue with some zoom events to promote greater inclusivity, as there is no doubt that zoom allows greater numbers of members and guests to enjoy these events irrespective of their geographic location.

The Master concluded the event by thanking all who had attended, and looked forward to the forthcoming Carol service and supper, for which a few places still remain.