Thanks to quick thinking and a prompt follow-up by the Master when he was introduced to one of the architects at the Triennial Awards Lunch last September, he organised a visit to the Theatre Royal, Drury Lane for Tylers & Bricklayers on the morning of Tuesday 29th March.

There has been a theatre on this site since 1662, the longest continuous theatrical occupation in this country, although several different buildings have existed during that period (at least two having been destroyed by fire). The present building was designed by Benjamin Dean Wyatt in 1812 with subsequent significant internal alterations in the 1890s and 1920s. The theatre closed its doors at the beginning of January 2019 so that a major internal redesign could be undertaken. The architects of this major project were Haworth Tompkins, two of whose team (both involved in the design work) showed us round – Patrick Haymann and Jacqueline Wheeler. We were also accompanied by Maggie Pawlak, the property projects manager of the group that owns the theatre. Between them, they gave a fascinating insight into the £60million project. The guiding principle had been, as far as possible, to get back to Wyatt’s original concept, stripping out much of the subsequent alterations, while making the theatre up-to-date in terms of safety and the environment. The grand public rooms, a unique feature of this building within a UK context, have all been beautifully restored and access to them (previously only for those with expensive seats) has been rethought so that those heading for the cheaper seats are no longer condemned to use insignificant side-doors with long, dark corridors and steep stairs. 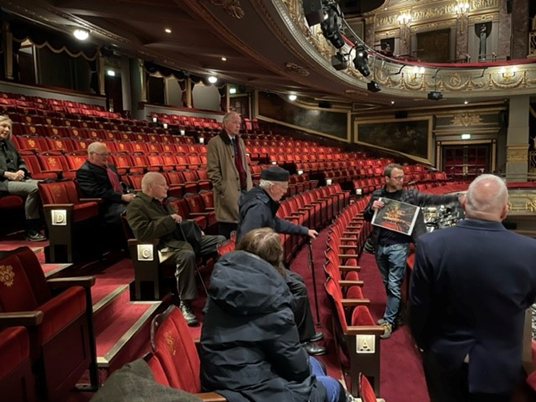 The work was nearing completion at the time of our visit and the superbly restored theatre will re-open in the summer. The provision of better wheelchair access and the improvement of sightlines has resulted in the previous seating capacity of 2,300 falling to 1,900 but the owners felt the enhancements fully justified that reduction. One of the most impressive changes has been the re-opening of a grand staircase, hidden for a hundred years and now adding considerably to the imposing effect of the entrance foyer, now surely the most impressive in theatreland.

After an absolutely fascinating 75 minutes with our hosts, who were justifiably proud of what had been achieved, we took the short walk to the Delaunay, where Drury Lane joins the Aldwych, where coffee, croissants and conversation were clearly enjoyed and members of the party were able to thank The Master for making the arrangements for a most enjoyable visit. 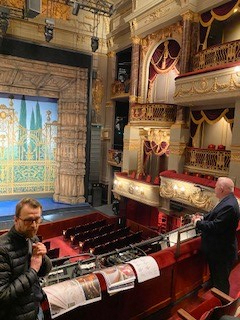