June is always a busy month for the Master with several important City events and the annual Livery weekend for Masters and Prime Wardens, in addition to Company events, functions and visits. This year we have also celebrated the Platinum Jubilee of Her Majesty the Queen with a four-day bank holiday weekend.

The Masters and Prime Wardens of the City Livery Companies were not directly involved in the Jubilee celebrations so we decided to pay our own tribute and mark the Queen’s remarkable 70 years of dedicated and selfless service to the nation at our Masters & Clerks Lunch at Armourers’ Hall on 9 June. 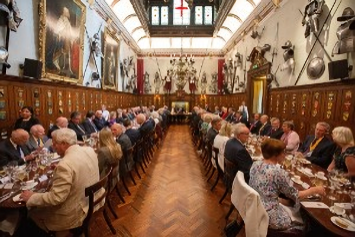 The lunch had a royal theme. The Master, Wardens, the principal guest, the Clerk and the Chaplain processed into the Hall accompanied by Honorary Freeman Richard Townend playing “Zadok the Priest” on the piano. We then enjoyed a Royal themed lunch including salmon and sole Balmoral, Crown of Lancashire lamb and a Queen’s duo of puddings. Perhaps the strangest royal connection was the Dubonnet jelly, served with the Windsor red cheese, the Queen’s preferred drink being gin and Dubonnet! The principal guest was Hugo Vickers, the renowned writer, broadcaster and royal biographer who reflected on the Queen’s remarkable reign and told several interesting and amusing anecdotes. 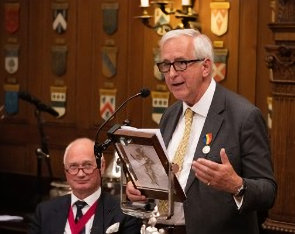 I commented in my speech welcoming the guests on the fact that the eight visiting Masters were all male which is surprising in a year when 20 per cent of the current Masters of the 110 Livery Companies are women. Perhaps this says more about the nature of the Construction Group of Livery Companies than it does about the increasing and welcome diversity of the Livery movement.

The Master and Wardens with 7 of the 8 visiting Masters

On the day after our Masters & Clerks lunch, the Masters and Prime Wardens of the Livery Companies and their consorts went to Sheffield for the annual Livery weekend. The Lord Mayor, Lady Mayoress, the Sheriffs and the members of the Livery Committee also joined the party, as did the Masters of comparable livery companies from other cities around the UK. The weekend was generously hosted and superbly organized by the Master and Clerk of the Company of Cutlers in Hallamshire.

On Friday evening there was a welcome reception and buffet supper in the Millennium Galleries where I had an opportunity to greet old friends and meet Masters who I had not come across so far in my year or who are newly appointed. The Cutlers had organized a full programme of visits for the Saturday, showcasing the history and heritage of Sheffield and its metalworking industries and also showing how industry has adapted and evolved to meet the challenges and requirements of the 21st century. We also had an opportunity to see several craftsmen and women in action and to visit the workshop of an award-winning silversmith. On Saturday evening, we were guests of the Cutlers’ Company for a black tie dinner in the magnificent Cutlers’ Hall in the centre of Sheffield. The Master Cutler, James Teare, welcomed the guests, the Lord Mayor spoke in response quoting (I suspect for the first time in his year in office) the lyrics of the Tina Turner song “Simply the Best” (the link being that Tina Turner apparently played her last ever UK gig in Sheffield) and the Master Mercer proposed the toast to the Company of Cutlers. 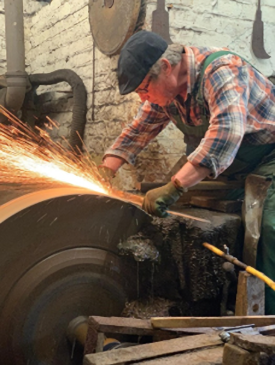 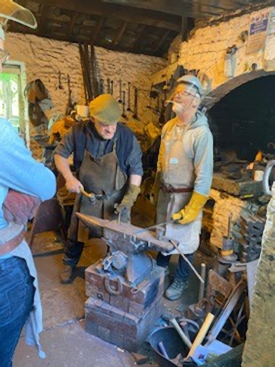 On Sunday morning, the Masters and Prime Wardens of the 2021-22 year met to decide on the name for our Past Masters Association and to select an organizing committee. Both were easy decisions: the meeting unanimously agreed that our PMA would be called “The Platinums” and the committee was formed by eager volunteers making their way to the front of the conference room as the rest of us headed for the exits.

We then travelled to Wentworth Woodhouse, a grand house about 10 miles north east of Sheffield, for a private tour. Formerly the home of the Fitzwilliam family who made their wealth from the coalfields of south Yorkshire, the house is now owned by a trust which is undertaking a long programme of restoration. The plan is that part of the vast property (which reputedly is the largest house in England, with 365 rooms, more than 1,000 windows and 5 miles of corridors) will become a hotel and there will also be dedicated space for the local community. 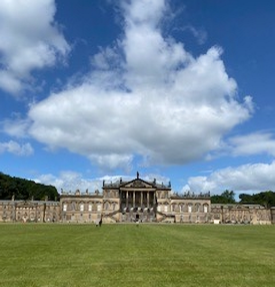 It was a very enjoyable weekend and we were so fortunate to be able to come together in this way after two years in which the Masters’ weekends were cancelled due to lockdowns and covid restrictions.

Last week I was delighted to be invited to attend a reception and Beating Retreat at Brompton Barracks, the home of the Corps of Royal Engineers. The Tylers and Bricklayers greatly values its affiliation with the CRE and events such as these strengthen the bonds of friendship. I was welcomed to the reception by Lieutenant Colonel Guy Cheesman, Commander of the Chatham Station and also met Major Paul Hurst who represented Colonel Cheesman at our Craft Awards Lunch in March and many other RE officers. Also present were Brigadier Guy Boxall, Commandant RSME, and Mrs Rachel Boxall, who attended the Company Annual Guest Dinner last month.

Beating Retreat was performed on the parade ground in the centre of the barracks and was, as always, a faultless display of music and drill on a lovely June evening. 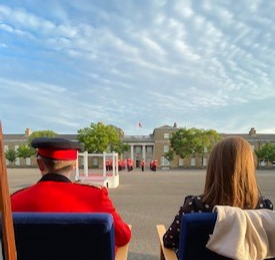 I look forward to returning to Chatham in September 2023 when we will have an opportunity to try some hands-on bricklaying and visit the Royal Engineers museum.