In the middle of England’s hottest spell for many years, perhaps since 1976, the light rain was quite a novelty to twenty-five Tylers and Bricklayers who gathered for our Charter day outing. The venue was Queen Elizabeth the First’s hunting lodge in Epping Forest, a favourite place for relaxation and entertainment away from the formality of the Court. The 6,000 acres of Epping Forest was once a royal hunting ground but is now the largest public open space in the London area and a site of special scientific interest.

Spirits were not dampened by the weather, and the merry band were welcomed by the Master and Mistress in the new Epping Forest visitor centre, funded by the Heritage Lottery Foundation. The Master had thoughtfully arranged for us to be ferried from Walthamstow Central station in personalised carriages. 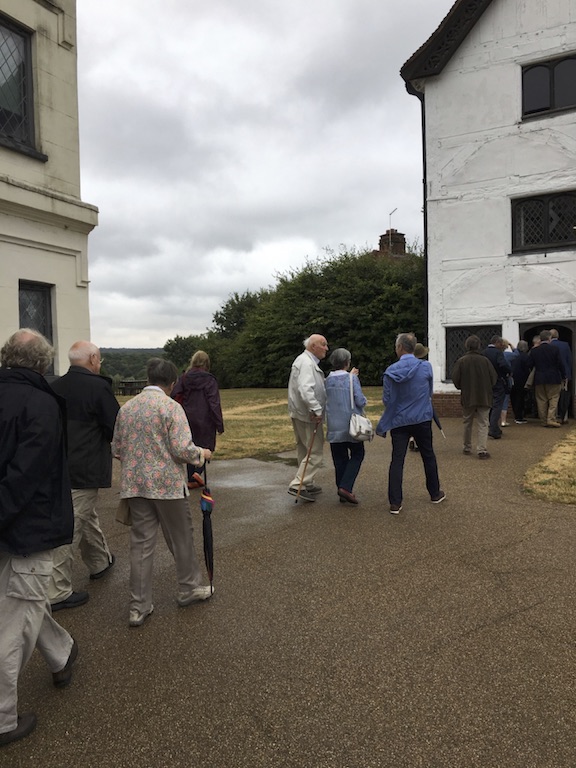 A few metres away from the visitor centre lies the hunting lodge itself, which was initially an open two-storey grandstand built for Henry VIII and later enclosed to form the lodge by Elizabeth I.
Our tour was led by Epping forest staff members Michelle Hatwell and Jeff Sinclair, the latter a Forester for over forty years. Umbrellas were kept in readiness, but thankfully little used! Michelle kindly drew our attention to several architectural features inside the lodge which would have been brightly painted in reds and blues, rather than the monochrome we are accustomed to today which was a Victorian interpretation. Timbers on the exterior of the building have recently been painted with limewash, so the expected black-and-white appearance is not apparent. This is to repair previous over-painting with non-porous paints which has sadly led to a deterioration of the timbers. 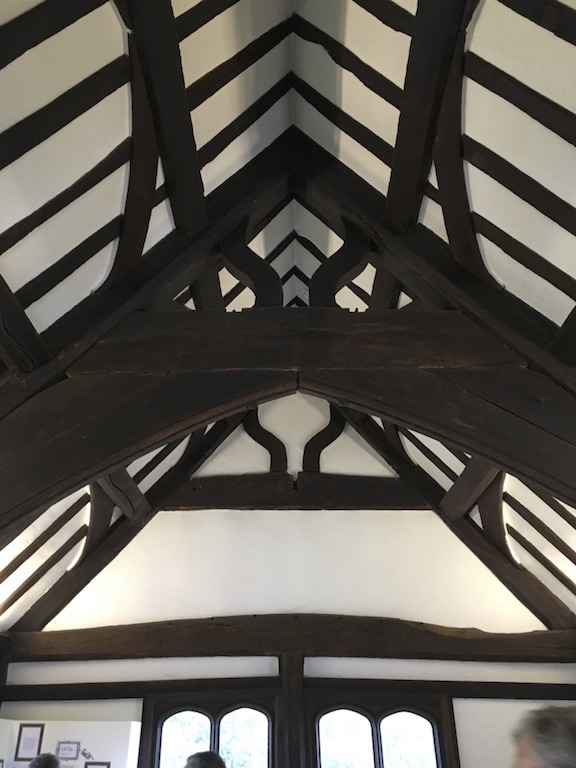 A past master observed that the roof was rather over-engineered and a bit clumsy, which led to a discussion about whether this was accidental or a deliberate attempt to evoke a rural idyll. An excellent display of double struck brickwork and some early encaustic tiles in the hearth were also noted. 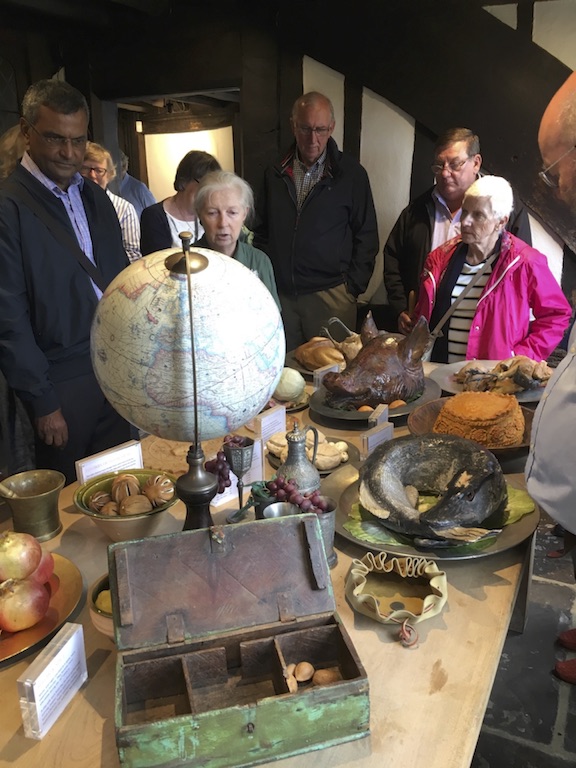 The recreation of an Elizabethan feast in the lodge included a boar’s head, various fowl, a massive meat pie and many exotic fruits.
Jeff Sinclair then led our intrepid group, umbrellas and waterproofs at the ready, deep into the forest to admire some choice examples of venerable oaks. There are over 50,000 trees which are over 500 years old, and Jeff explained that he has recently realised that they all communicate with one another using a range of methods.
Back inside, we learnt that Poll Hill brick kilns were situated nearby in the mid 19th century, and continued until the 1930s. There was plenty of fuel available in the forest, and sand, clay and brick earth were available in abundance.  Jeff and Michelle had kindly brought examples of tiles and bricks found in the forest over many years.
The deer in the forest are statutorily protected, so the wonderful buffet lunch provided back in the visitor centre was light on venison but made up for this by its quality and variety.
The spectacular location and superb company made a most memorable day. The Master and Mistress live nearby and the Mistress was personally involved in many of the arrangements for the visit. They were warmly thanked and congratulated by all who attended.