After many months of delay and at the fourth attempt, the Annual Dinner was brought to life like a phoenix from the ashes of lockdown. It was a long-anticipated return to normality, and it almost felt as though the last year and a half had passed in a dream.

Nearly a hundred members and guests attended the reception and dinner in the Grand Hall of the Barber-Surgeons in Monkwell Square, nestling between the Barbican and London Wall. As far as we can tell, this was the first time the Company had dined at this hall in living memory. 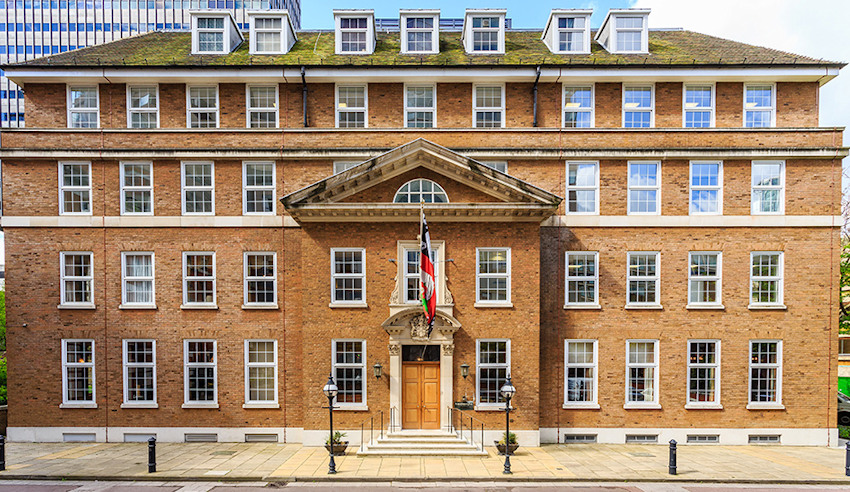 The Worshipful Company of Barbers have had a hall in this location since 1440. In 1636, they added an anatomy theatre designed by Inigo Jones, based on the famous anatomy theatre in Padua. This was the only part of the Barbers' buildings to survive the great fire in 1666, but it was demolished in 1784 to make way for housing. The second Barber-Surgeons’ hall was almost completely destroyed by an incendiary bomb in December 1940, and the third hall was opened in 1969, 30 feet further east at the request of the City of London Corporation who were developing the area.

This latest Barber-Surgeons’ hall proved a wonderful venue for our event. The reception was highly animated as many of those attending had not seen each other in person for a long time. The arrival of the Sheriff, Alderman Professor Michael Mainelli and his consort Elisabeth sent a buzz around the room, and they were greeted by the Master, Dr Michel Saminaden, the Mistress, Maureen Saminaden, and other members and guests. All too soon we were ushered into the Great hall, which is dominated by a huge Hans Holbein painting of Henry VIII uniting the Barbers’ and Surgeons’ Companies.

Grace was given by Liveryman Colin Menzies, and conversation flowed freely around an elongated horseshoe shaped table – no longer any separate tables of six, and what a relief! The meal was surely one of the best we have experienced anywhere – king scallop soufflé and shellfish chowder, poached fillet of Hereford beef with beef cheek tortellini and basil salsa, and a very rich chocolate pot with blackcurrant sorbet and granulated white chocolate “soil”. As usual, the wine committee pulled out all the stops, with Louis Boyier champagne at the reception, a fine Macon Villages Domaine Chene 2020, our much admired Chateau Beaumont 2014, and a fine madeira to finish.

The Master proposed toasts to the Queen, the Prince of Wales, the Duchess of Cornwall and the other members of the Royal family, the Lord Mayor, the City of London Corporation and of course the Sheriffs. On this occasion, probably for the first time for hundreds of years, there was no loving cup, but we enjoyed the sung grace from “Laudi Spirituali”.

The welcome to our guests was given by Court Assistant David White. As well as the Sheriff and his consort, these included Mr Stelio Stefanou OBE, DL, founder of the Stefanou Foundation, his wife Mrs Susie Stefanou, Mr James de Sausmarez, Common Council member and Master Joiner & Ceiler, Mr William Makower, Upper Bailiff of the Weavers’ Company, and Mr Freddie Eggleton and Ms Cecily Foster of the Royal Engineers.

The response was given by the principal guest, Alderman and Sheriff Professor Michael Mainelli, who gave an excellent and amusing speech focusing on aspects of the City during lockdown and the Lord Mayor’s activities and aspirations. The Sheriff reported that he and his wife Elisabeth who live at the Old Bailey had been very busy as trials continued “face to face” in lockdown with increased activity due to better utilisation of courtroom space. He noted the long history and tradition of tiling and bricklaying in London, and praised the activities of the Company for over 450 years including its many charitable works, support for the City and the Lord Mayor, its apprentices and its military affiliations. He highlighted the Company’s triennial awards fostering excellence in tiling and bricklaying within the M25. Finally, he proposed a toast to the Company, “May it flourish root and branch forever, and good health to the Master”.

The Master gave a response to the toast on behalf of the Company, thanking the Sheriff for his kind words, and for agreeing to attend the dinner in his hectic schedule, with so many other events taking place in a short period due to lockdown. The Master then introduced Julian Cable who provided a musical interlude, playing a range of fine numbers on the Barber-Surgeons’ piano including the rather appropriate Gershwin’s “Summertime”.

The Master highlighted the extraordinary contribution of Deputy Master Lesley Day, in supporting the Company as acting Clerk for almost a year during the illness of our former Clerk, John Brooks. John has now retired and we are delighted that following hospital treatment he is much improved in health. The Master presented Lesley with a wooden cased mantel clock, hand-made in Scotland, with an engraved plaque expressing the Company’s gratitude.

Closing the evening, the Master paid tribute to Party Ingredients, the excellent catering team at the Hall, thanked Julian Cable for his wonderful piano playing, and thanked all members and guests for attending this magnificent event. Not least, he acknowledged the hard work and planning by our learned Clerk Heather Smith, whose first annual dinner had been a great success, and our long serving Beadle, David Wylie.

Finally, the Master read the words of a recently discovered Tylers’ and Bricklayers’ song, “The Watchman's Song”, which has not been heard for generations.

“List! Good People All. Past Ten O’Clock, the hour I call! Now say your prayers and take your rest, with conscience clear and sins confessed. I bid you all Good Night”.

It is an evening which everyone who attended will remember with fondness, our first T&B dinner after “the great lockdown”.