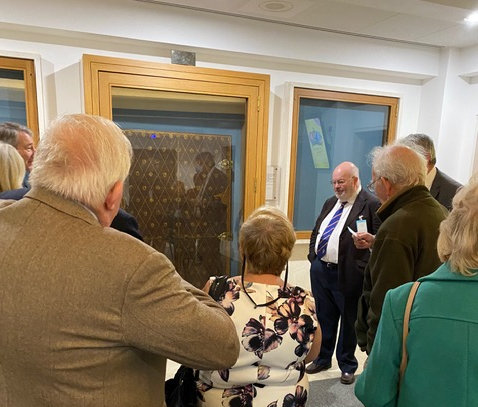 Once we had all assembled in the large airy atrium of the British Library, we divided into two groups and the tours began.

Our guide, Kevin Mehmet, a Librarian with 41 years’ service at the British Library, explained that as the legal deposit library, the British Library receives a copy of every printed and digital publication produced in the UK and Ireland, including each version of an individual book – hard back, paper back, large print, braille and audio - received at a rate of about 8,000 separate items each day and adding about 3 million new items to the collection every year. Not surprising, then, that the British Museum library was becoming short of space in the 1950s and a dedicated library was mooted.

In the early 1960’s the brief for a new library was awarded to an architect Colin St.John Wilson; eventually the building, which loosely resembles a ship, was completed after many delays and at a cost of £142million in 1997. In 2015, the building was Grade I listed, one of the youngest buildings to be granted top listing status. The building was constructed using 10 million handmade bricks. The clay for the bricks came from the same claypits that were used for the Gilbert Scott designed St Pancras Hotel next door, to ensure that the facades of the two buildings are of the same colour.

The public areas cover six floors from the lower ground upwards. There are four basements (the lowest of which are below sea level) containing 300km of shelving. The glass tower that runs through the middle of the six floors houses the King’s Library, George III’s private collection of 80,000 leatherbound books that were given to the nation by his son. It is impressive! 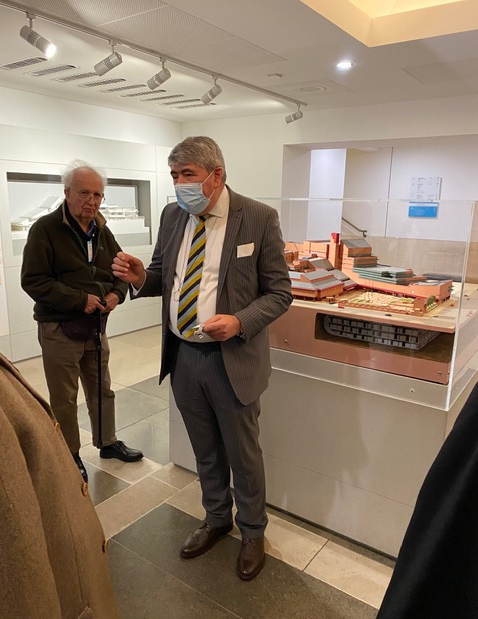 We were taken to the 3rd floor where maps, science and Asian and African publications are kept. There we were shown the Klencke Atlas which was presented to Charles II to mark his restoration in 1660; it is an impressive work, partly for the size of the book (almost 5ft high) but mostly, we were told, for the remarkable accuracy of some of the maps illustrated. The Klenke Atlas, like all the valuable works in the Library’s collection, can be viewed and studied online through the Library’s website.

The British Library also houses a large collection of postage stamps (over 8 million items) from the original Penny Black through to today. The Tapling Collection of stamps was originally bequeathed to the British Museum together with an interesting old machine for printing stamps; subsequently it was housed in the British Library.

The tour finished in the Sir John Ritblat Gallery where the library treasures are displayed. From a 300AD bible (the Codex Sinaiticus), beautifully scribed on vellum, to Paul McCartney’s music manuscripts – all were there! Beautifully illuminated bibles and sacred writings including Korans and Buddhist tracts (much gold leaf); Magna Carta, Shakespeare’s first folio, and Tyndale’s New Testament; manuscripts of works by Mozart, Beethoven (also his tuning fork) and Handel’s Messiah. 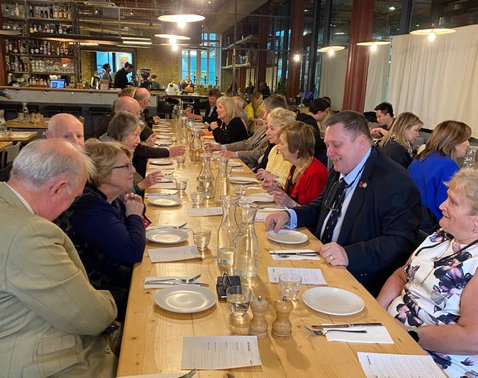 And so to lunch at ‘Caravan’ in Granary Square, a vast converted warehouse that seemed to be very popular. We sat at a long table and were efficiently served with an interesting variety of delicious dishes that made up the ‘Feasting Menu’ and there was also good selection of drinks both alcoholic and soft!