Zooming in on the Brickskill Event – 7 January 2022

Gerard very kindly offered to host the talk at his workshop in Buckinghamshire and was generously assisted by his family members who provided production facilities for the hour-long event. 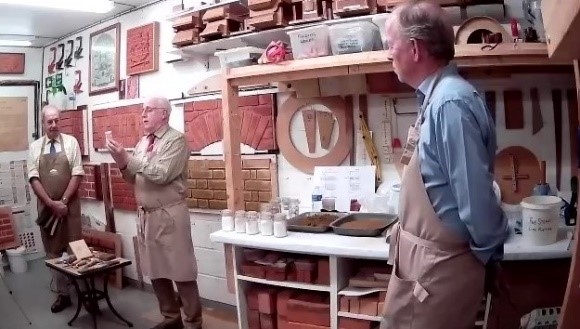 Aided by a fine selection of samples Gerard explained in detail the evolution of binders, from the historic pure limestone-based cements of centuries past through to the modern binders we know of as ordinary Portland cement, now commonly referred to as OPC.

It was fascinating to see how the impurities in the chalks varied substantially the properties of the lime putty’s over the centuries and how society demanded over time, faster and stronger setting materials. 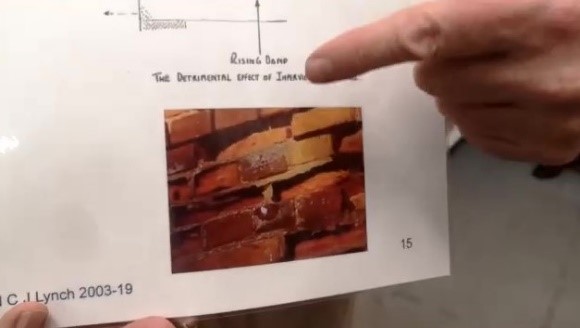 Next, Gerard went on to discuss the issues that arise when historic buildings, constructed using lime-based mortars, are repointed using modern cement-based mortars. The mixture of impervious cement-based mortar would seal the old “beathing” wall and prevent any moisture from escaping. This, over a very short period leads to failure of the bricks as they release their salts when saturated, the white efflorescence we so often see, crystalise and spall the face of the bricks. 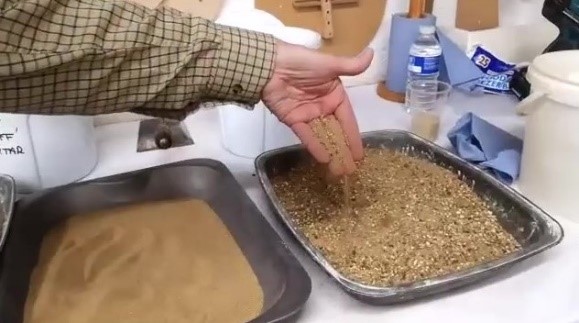 Before commencing the practical demonstrations Gerard explained the differences between the various aggregates and sands used as the mortar and pointing fillers predominantly on older buildings. Generally speaking, all are derived from sands graded to different standards, “fine stuff” being consistently fine graded and sieved which will permit a “polished” final finish and “course-stuff” comprising of a graded sand, commonly sieved from 0-3mm is used to achieve a textured finish. 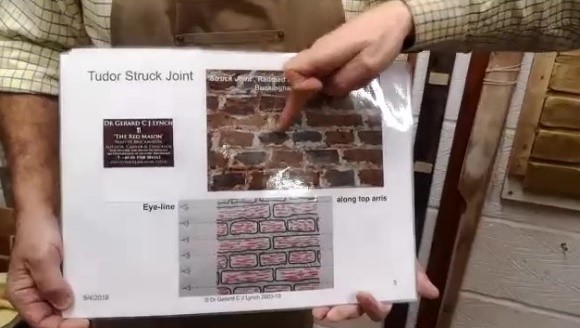 With the assistance of John Gorman, Gerard ran through the history and purpose of the various pointing techniques that would be demonstrated. He clarified the difference between “jointing” a homogenous process of finishing the joint using the bedding mortar, and “pointing” a separate activity undertaken using a different material from the bedding mortar and executed once the wall had been laid and all the joints raked out ready to receive the pointing materials. 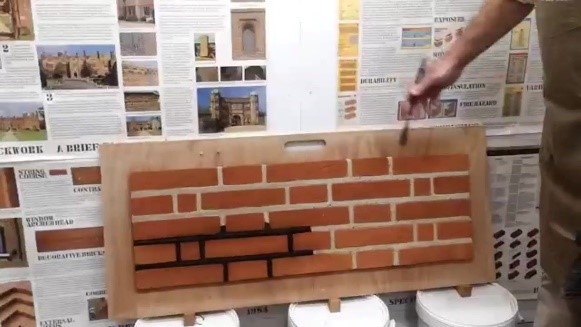 John then presented a couple of sample panels that he had prepared earlier and explained the physical differences between them all and how different sands can affect not only the colour, but also the texture of the finished joint. He described how each joint was formed and presented the variety of tools that he had used in the creation of these examples. He went on to “knock-up” the lime mortars Gerard had prepared earlier, ready for use. 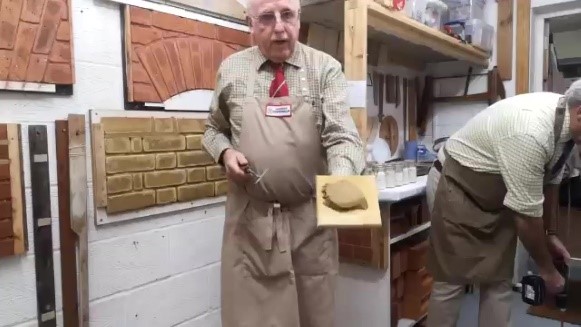 Gerard prepared a quantity of the mortar on his hawk and why it appeared much drier than that which we would normally see on a modern building site where invariably the wetter bedding mortar would be used for jointing. The lower water content in Gerard’s sample gave 3 key benefits; it was less susceptible to shrinkage and cracking; it would not smear on the brick faces causing staining and it allowed for good compaction when ironed into the joint. 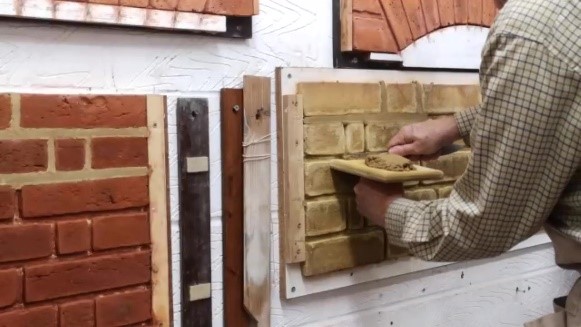 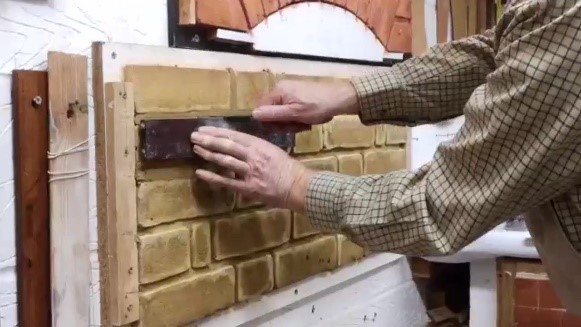 Gerard proceeded to point the sample panel, showing different methods of moving the mortar from the hawk into the joint. He showed how the joint was ironed in and cleaned off ready for the final treatment, which in this case was to be a ruled joint. 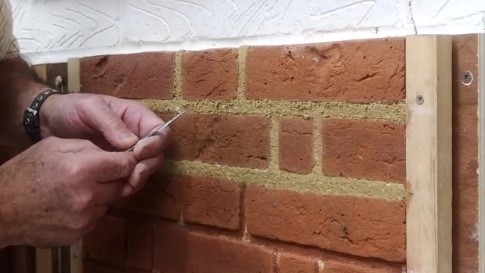 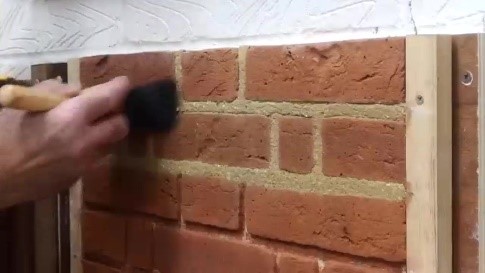 Next John illustrated the 3 stages required to finish the heritage joint, which is most favoured by SPAB, since it matches pre-existing weathered pointing found on many older buildings. Once the pointing had set sufficiently it was hit with a hard bristle brush to remove the laitance on the surface and create texture, next the edges of the bricks were cleaned using a small tool John had crafted for just that purpose, and finally the face was cleaned up by lightly brushing with a soft brush. 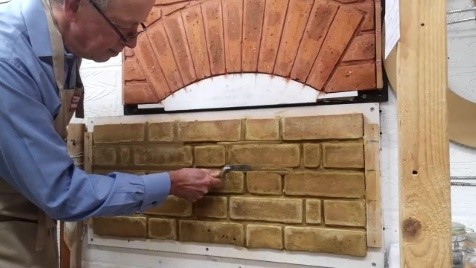 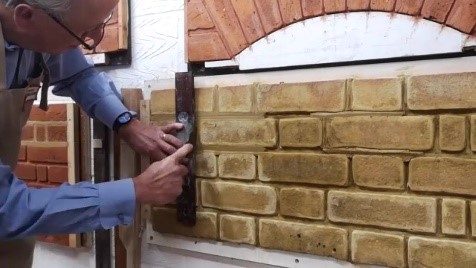 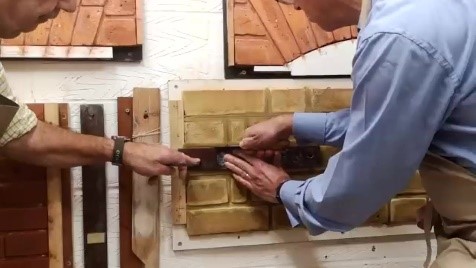 Having been paying very careful attention to everything he had been shown the Master stepped up, trowel in hand, poised ready to enter the practical world of bricklaying. The Master proceeded finish a double struck joint and then a ruled joint. He remarked afterwards that he hadn’t fully comprehended just how technical the process of jointing and pointing brickwork correctly was and indeed the difficulty and level of skill required to execute it to a high standard.

Gerard then hosted a question-and-answer session with all our “zoomers”.

The Master concluded the event by thanking all who had attended, Gerard’s son, Liam for providing technical support and not least Gerard and John for giving up their time to host such an entertaining and educational evening and looked forward to seeing everyone at the Common Hall Zoom event on Thursday the 27th of January.