What a pleasure to be able to enjoy a further ‘live’ event and in such pleasant surroundings.

On a crisp, sunny morning, over 20 members and guests of the Company joined the Master at the Mall Galleries near Admiralty Arch for a viewing of the 75th Annual Exhibition of the Wapping Group of Artists.

The visit was arranged by the Master in conjunction with Liveryman Karl Terry. Karl has been an active and enthusiastic member of this plein-air painting society since 2011 and five of his oil paintings were on display in the exhibition. The Master hatched the idea for the event with Karl when they happened to sit next to each other at the 2017 Triennial Awards’ lunch and got chatting. 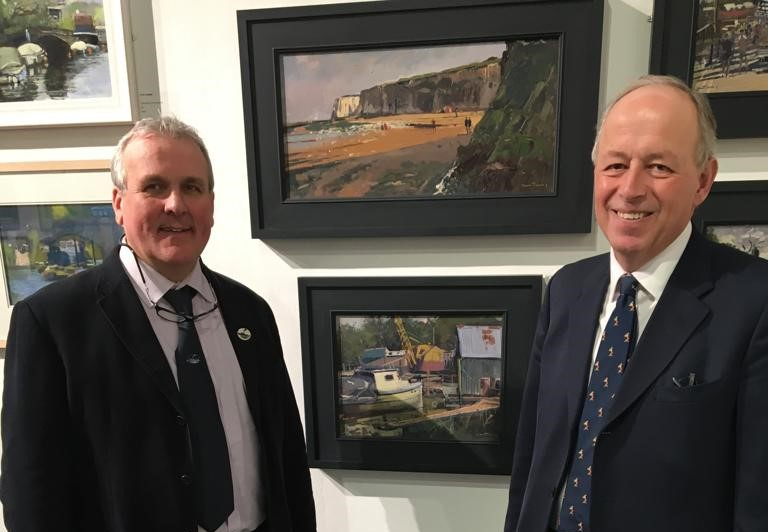 The Wapping Group was founded in 1946 and has a select membership limited at any one time to 25 artists, all dedicated and capable painters. Initially, the group met to paint the busy life of London’s Dockland, and hence its name. Since then, with the significant changes that have occurred to not only the Docklands but also the land alongside much of the Thames, the group has extended its reach. It now meets to paint at spots anywhere between Henley and the end of the Thames Estuary. In so doing, it has produced an evolving archive of the ever-shifting face of the river.

Come rain or shine, the ‘Wappers’ get together every Wednesday between April and September at their selected venue to savour the pleasures of plein-air painting. Like the Tylers and Bricklayers, enjoying ‘good fellowship’ is also one of their central aims.

We were warmly greeted on arrival at the exhibition with words of welcome from the Group’s President, Roger Dellar ROI, PS, RI. He was accompanied by Chairman Geoff Hunt PPRSMA, Secretary John Killens, and Karl. 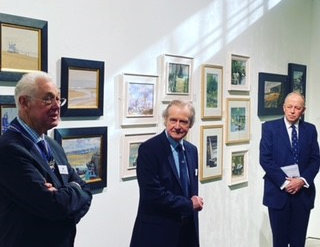 The four of them were generously on hand, as we made our respective ways around the exhibition, to talk to us individually about the work of the group, the challenges of plein-air painting, and their own experiences. Needless to say, they had plenty of stories to tell of sheltering from the rain under bridges and retreating quickly when the tide rose higher than expected! 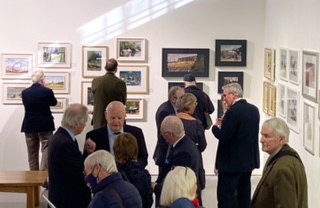 There were 120 oil and watercolour paintings on display; each member being entitled to exhibit five of their recent works. While the river was of course a regular feature, the works were hugely varied in style and subject. We heard how each member aimed to complete their painting within 2-3 hours, otherwise the change in light would be too great for them to continue. This speed of working was deeply impressive given the level of detail in many of the paintings and their overall quality.

Those in our group who had dabbled, inexpertly, with watercolours were surprised to learn that painting in oils is in fact easier for beginners. Mistakes can be remedied by the offending oil paint being swiftly removed with the wipe of a cloth. Not so watercolours!

After a fascinating hour and a half in the Gallery, we left the exhibition and repaired for lunch a short walk away at the Athenaeum, one of the most famous of London’s traditional clubs, where the Master is a member. We were joined by the four ‘Wappers’.

We were in for something of a treat. The Master had arranged for us be in the Picture Room, an elegant private dining room. An apt choice. Here, and with the assistance of Colin Menzies in choosing the menu, we enjoyed a delicious lunch, accompanied by some fine wines, with the opportunity for good, informal conversation around the table. 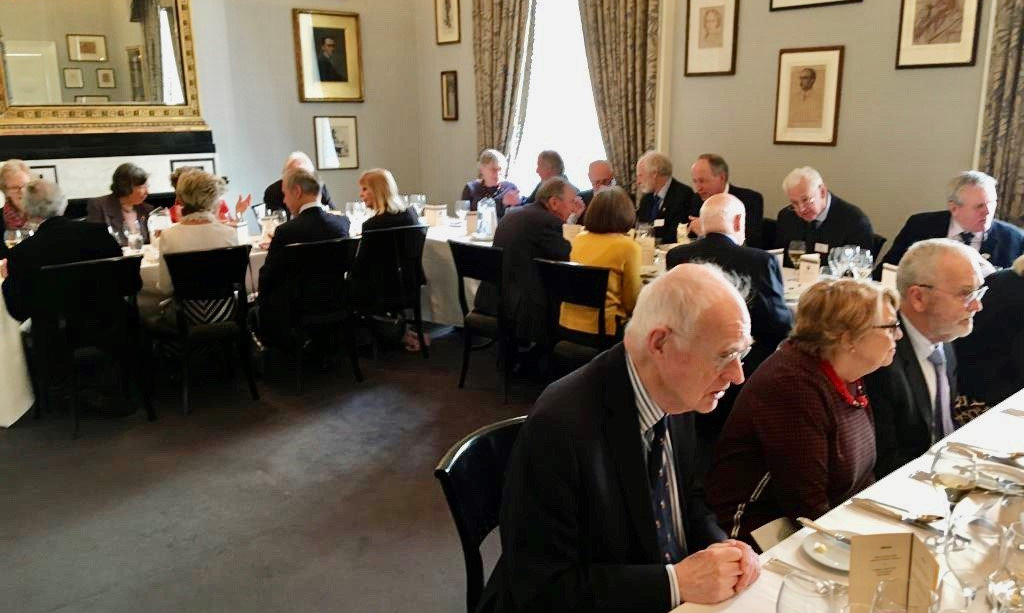 At the conclusion of the meal, we drank the loyal toast and words of thanks were exchanged by the Master and Roger Dellar. It all made for a delightful day spent amongst friends.