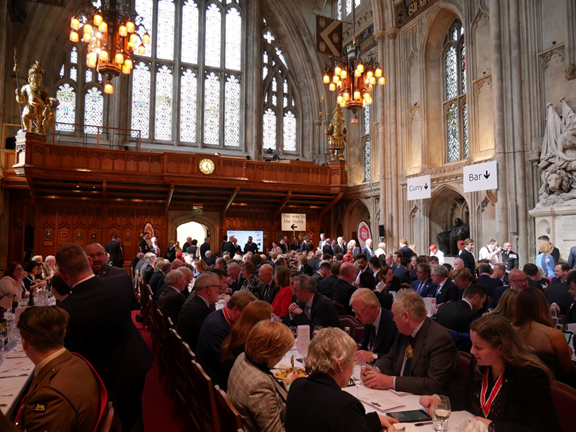 Over 25 Tylers and Bricklayers attended this special “Platinum Jubilee” edition of the Lord Mayor's Big Curry Lunch at Guildhall, at the invitation of The Rt. Hon. The Lord Mayor Alderman Vincent Keaveny and in the presence of their Royal Highnesses Princesses Beatrice and Eugenie. This annual event is held in support of ABF The Soldiers’ Charity (formerly known as the Army Benevolent Fund), whose Patron Her Majesty The Queen sent a personal message of appreciation. This was the 15th annual “Big Curry” Lunch, the first having taken place in 2008, with a gap of two years due to Covid 19. The event was held virtually last year, and it is particularly appropriate that it returned physically to Guildhall in Her Majesty’s Platinum Jubilee year.

The Master, Simon Martin, is a long-standing supporter of the charity, and has served on the organising committee of this event since its inception in 2008. He stood down as trustee of the Charity earlier this month after 9 years in the role, and was delighted to see such strong support from the Company at the lunch.

On arrival, after a short queue for security clearance, we were issued with green lapel badges which ensured entry into the Great Hall for lunch for the 1.15pm sitting. A glass of Pol Roger champagne was served on entry to the Livery Hall to start proceedings, with the pleasure of meeting friends old and new in the remarkable bright, sun filled hall, and an opportunity to participate in the silent auction and prize draw. 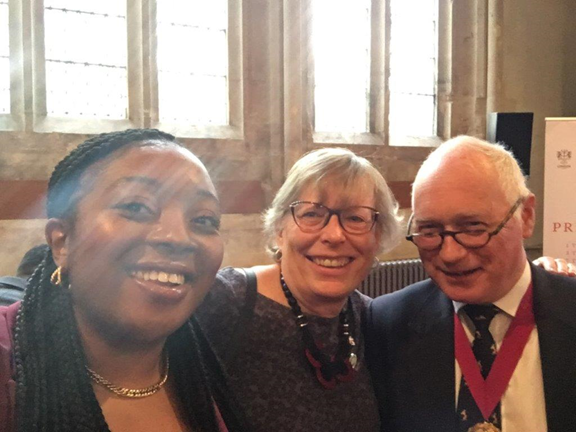 The large number of prizes were all generously donated by individuals or organisations in support of the charity. The silent auction included a pair of Wimbledon Centre Court debenture tickets (donated by the Master, Simon Martin), one week’s hire of a Southwold beach hut (donated by Past Master Jeff Fuller and Catherine Fuller), a tour and tea at Lambeth Palace for four people (donated by the Archbishop of Canterbury by arrangement with the Revd Sally Muggeridge), and many other exclusive trips, private visits and experiences. 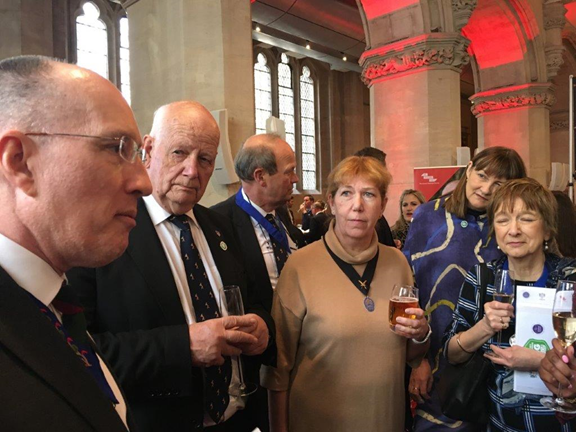 The Master kindly arranged for Sean Bonnington, Director of National Fundraising at ABF The Soldiers’ Charity, to meet with members of the Company to give us insight into the background to the event and the remarkable works undertaken by the charity. These projects include initiating and supporting the Pain Management Programme at King Edward VII’s Hospital, and the “Lifeworks” programme, supporting those struggling with the transition into civilian life upon leaving the services, covering both physical and mental health issues.

We then went up the stairs into the Great Hall in orderly fashion to queue for the buffet lunch, a splendid feast of chicken korma, rice, vegetables, dhal, mini-poppadom and naan, with a glass of Cobra beer or wine, followed by mango kulfi delivered to the table. Seating was “as you come”, so we sat in groups of four to six, enjoying the company and the occasion. We were welcomed over the public address system by the Lord Mayor, who was delighted to be hosting the event. 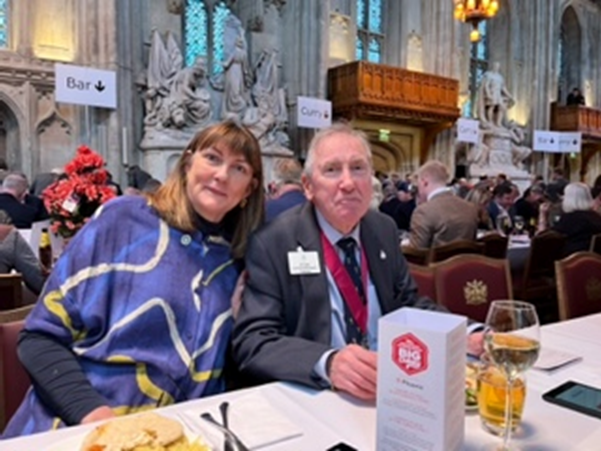 Feeding over 1300 people with a two course luncheon in two hours is a complex feat of organisation, and it worked exceptionally well with military precision.

After lunch, we went out via the West and South Ambulatories, where several of the Companies were selling their wares, with a proportion of the purchase price going to the charity. There were stalls selling house plants (Gardeners), bread (Bakers), fruit (Fruiterers), knitted goods (Framework Knitters) and turned wooden items (Turners) amongst others. Finally, we congregated in the Livery Hall once more to see the countdown of the silent auction. Last minute bids were made, only some of which were successful!

We are very grateful to our event organiser, Liveryman Diana Maltzer, who ensured we all turned up at the right place, properly dressed and at the right time. A most enjoyable experience, and a good cause supported wholeheartedly by the Company once again.