Annual Dinner at Haberdashers’ Hall on Thursday 12th May 2022

The 2022 Annual Dinner was held at Haberdashers’ Hall in West Smithfield. The Worshipful Company of Haberdashers is one of the Great Twelve Livery Companies, and the Hall is their fourth Hall, the first having burnt down in the Great Fire in 1666, the second having been destroyed in the Blitz in 1940 and the third redeveloped in 1996.

The current Hall was built on a site acquired late in the last century, with the Hall on one side, and an office development on the other side, and was opened by HM the Queen in 2002. The Tylers and Bricklayers awarded the building the Triennial Award for brickwork in 2005. It is an attractive design in red brick and is light and airy throughout. The detailing can be inspected closely whilst climbing the fine spiral staircase to the First Floor, as within its curved brickwork walls it gives the appearance of headers throughout, with a flat rubbed red brick arch at the top, leading to the Ante-room to the Hall itself. 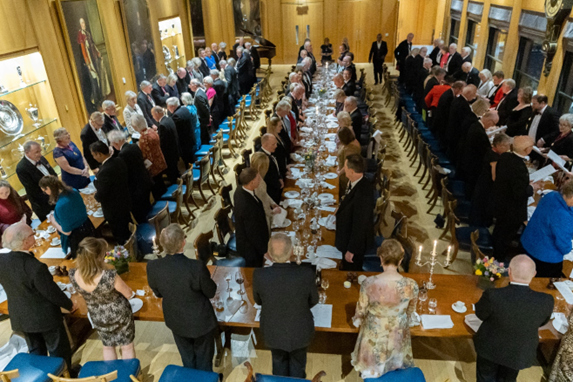 After greetings from the Master, Upper Warden and Renter Warden on the receiving line, champagne was served while the guests mingled and chatted. The old bell of Haberdashers’ Aske’s school was sounded to usher us into the Hall, with its tall windows and timber pyramidal ceiling, where Honorary Freeman Richard Townend was playing the piano. The Master, Wardens, Clerk and the Honoured Guests, including representatives from the Haberdashers, the Royal Engineers and The Royal Navy, were clapped into the Hall, the incoming Chaplain said Grace, and we seated ourselves for the meal, which started with fish, then a delicious main course of duck, and finished with pannacotta, all accompanied by very approachable white, red and dessert wines, port, coffee and mints.

Toasts followed, the Guests were formally welcomed by Court Assistant Tom Christopherson, and we listened to an informed speech from the Principal Guest, Professor Dame Carol Black. Dame Carol has had a long and distinguished career in medicine and in public service. She is currently an independent adviser to the Government on illicit drugs and chairs the Boards of the British Library, the Centre for Ageing Better and Think Ahead, the Government’s fast-stream training programme for Mental Health Social Workers and was previously Principal of Newnham College Cambridge and President of the Royal College of Physicians. Dame Carol reminded us of the importance of Health, Safety and Wellbeing in Construction, of the distressing rate of suicide within the industry, the unsavoury levels of anxiety and high workload, particularly among self-employed workers, and the stigma of admitting to poor mental health. The charity Mates in Mind is trying to tackle some of these difficulties, including those who self-harm or use recreational drugs. Dame Carol concluded by proposing the toast to the Company and the Master. 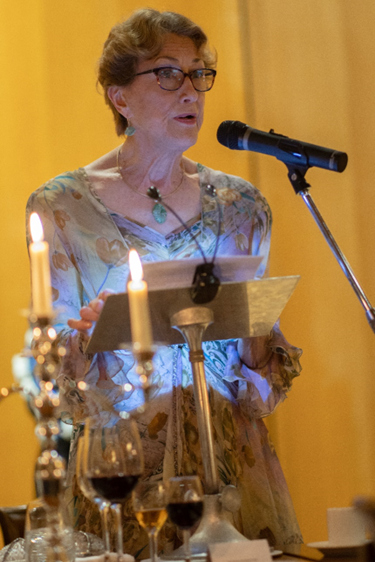 The Master responded to the toast. He spoke of the Haberdashers’Company, and asked where the Triennial Award certificate from the Tylers and Bricklayers is displayed, as, to date, unaccountably, he had been unable locate it. We were reminded that people – our members and those who we support through our charitable giving - are central to the Livery movement and to the Company. The Christ’s Hospital Appeal is doing very well, and it is hoped to be on the way to providing a third presentation to the School, to award another life-changing educational opportunity to allow a pupil to enjoy a superb secondary education.

The Master concluded by thanking the Clerk, the Caterers and all those who had contributed to the evening’s enjoyment, and adjourned the Company outside to the Ante-Room, where the Master, Wardens, members and guestscould rest for fellowship and a well-earned stirrup cup.