We were met by the Master on the morning of Monday 27 June in the reception of the Titanic Hotel in Belfast, a new hotel formed in the old main offices of the Harland and Wolff shipyard. Sitting close to the slipways where the luxury White Star liners Olympic, Titanic and Britannic were built, the area resonates with a poignant history – that of two ships built with great craftsmanship which were to have a very short life indeed, and of a whole shipbuilding industry that has more recently come to an end despite millions more people now regularly taking to the seas today in amazing liners.
Travelling from various airports, some of us experienced disruption and rescheduling of flights as the airlines struggled to maintain their timetables. 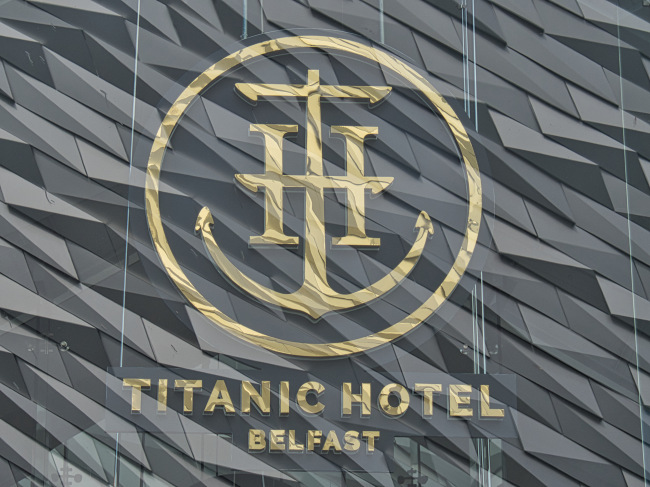 Our first visit was to the Titanic Museum lying just opposite the hotel. This was opened just in time for the Centenary in 2012 of the sinking of the Titanic and was a gesture of faith in the future use of this derelict quarter of Belfast on the Lagan River. There was a surprising amount to see and a tour easily filled a couple of hours or more. Using modern image projection, the Museum focused on the shipbuilding heritage of Belfast and the development of Harland and Wolff as the largest shipbuilders in the world not just riveting huge hulls on the many slipways but also providing all the internal fixtures and fittings to make a luxury liner. This modern building directly overlooks the slipways where Olympic and Titanic were built side by side and inevitably the sinking of Titanic on its maiden voyage after having struck an iceberg was briefly covered but with emphasis to the aftermath and consequences to the shipyard. This museum had no recovered relics but using film showed the Titanic resting today on the seabed of the Atlantic Ocean. Our tickets also included entry to the SS Nomadic in a neighbouring dry dock, built at the same time as RMS Titanic’s tender ship for first and second class passengers embarking in Cherbourg and the last remaining White Star vessel in the world. 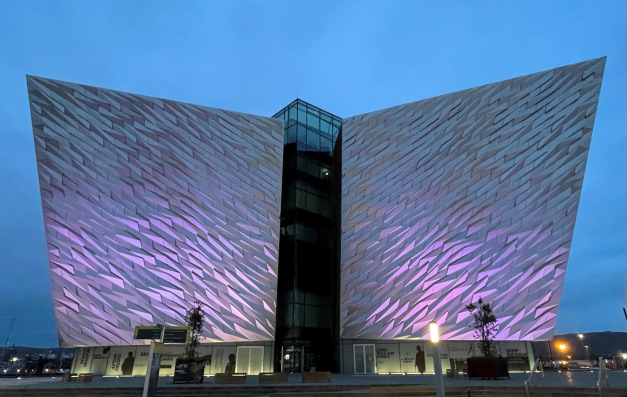 At 6pm we were all off by coach for a visit to the Crown Liquor Saloon for a pint (or two) of Guinness. The Crown is a gem of Victoriana and one of the great bars of the world, a rare surviving example of the Victorian gin palaces which once flourished in the industrial cities of the British Isles. Dating back to 1826, it is now owned by the National Trust. A general comment was how much better the Guinness tasted in Ireland. We then walked around the corner to the nearby St James restaurant for a very enjoyable and convivial dinner in a private room 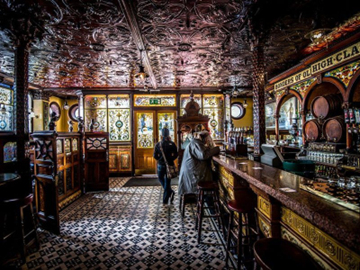 On Tuesday 28 June, with the weather looking to be predictably a bit variable in Northern Ireland, we travelled by coach on a tour of Belfast, first stopping at the City Hall to see the Titanic Memorial listing all those who perished in April 1912. 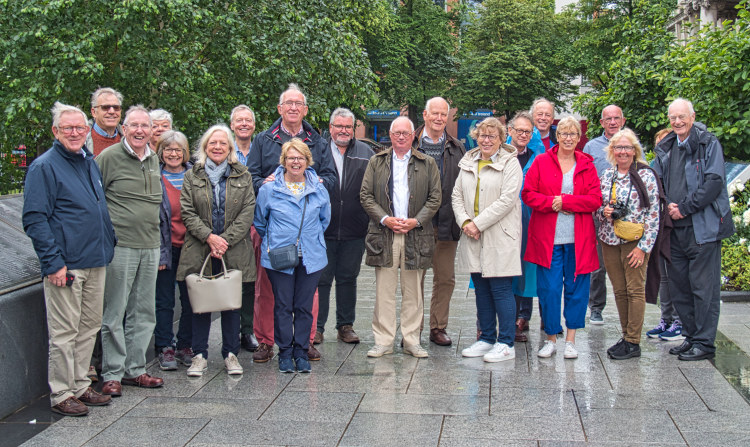 The coach next took us on a short tour to see the Peace Wall, Falls Road and Shankhill Road – all names familiar to us from reporting of “the troubles”. Our guide Paul gave us a useful insight into how the religious divide came about in Northern Ireland – an area that seems still imprisoned in its past. We then proceeded through the beautiful Antrim countryside and a short lashing of rain to the seaside resort of Ballycastle where we stopped for a welcome coffee. We were able to view Rathlin Island just across the water. Moving up the coast we stopped at a viewing point at Portaneevey and were able to see across to Scotland. Below us we could see Carrick-a-Rede island famed for its salmon fishing and accessed by a precarious rope bridge swinging 30 metres above sea level. Further along the coast lay the Giants Causeway – one of the most visited natural features of Northern Ireland and a UNESCO World Heritage Site. This involved a mile walk down to the unique rock formations of vertical hexagonal columns projecting out into the sea. They are truly fascinating and after this exertion we were back in the coach passing the beautiful little fishing village of Portballintrae. We stopped for our well-earned packed lunches overlooking the old ruins of Dunluce Castle. Quickly passing through Portrush and Coleraine it was time to make for Derry/Londonderry and the Bishops Gate Hotel. 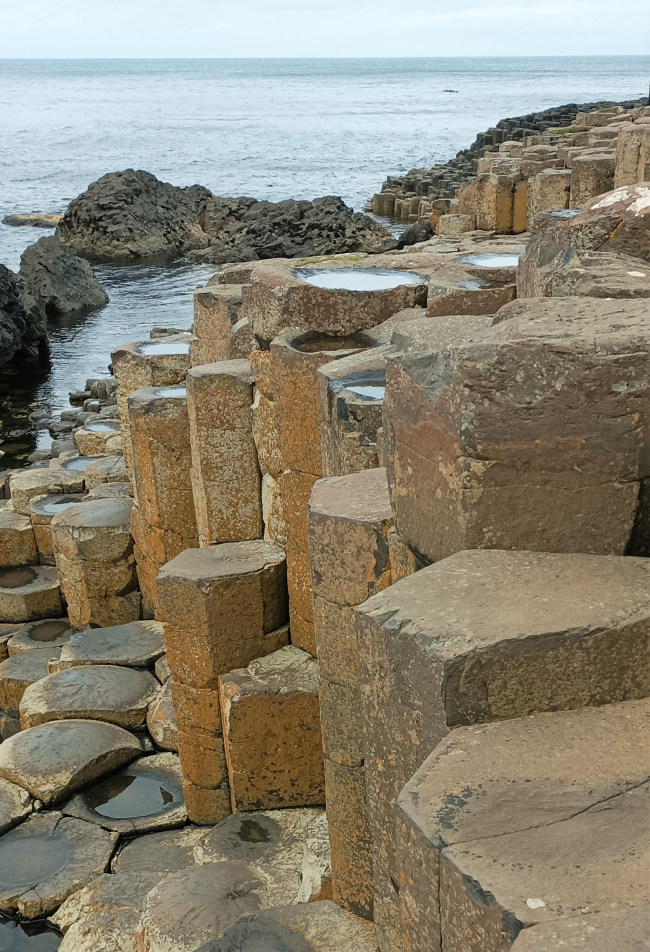 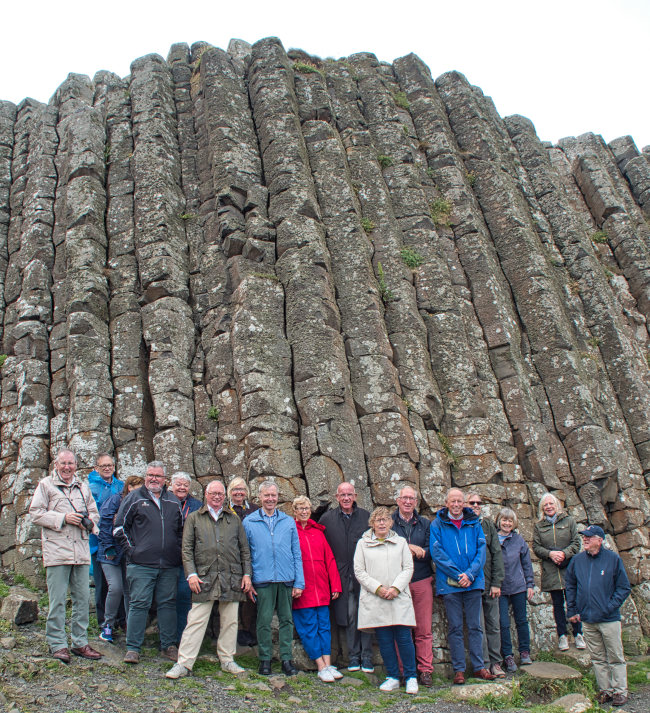 With time for a walk around the City to stretch our legs, we met for pre-dinner drinks in the Hervey Library before going into the Northern Counties Ballroom for dinner together.

The following day we met outside the hotel for a guided walking tour of the 400-year-old walls of Derry (built by Tyler and Bricklayer Peter Benson), viewing the guns donated by various London livery companies and learning about the siege of Derry. We then took a stroll down to the Bogside, with its iconic wall murals and the Bloody Sunday memorial. 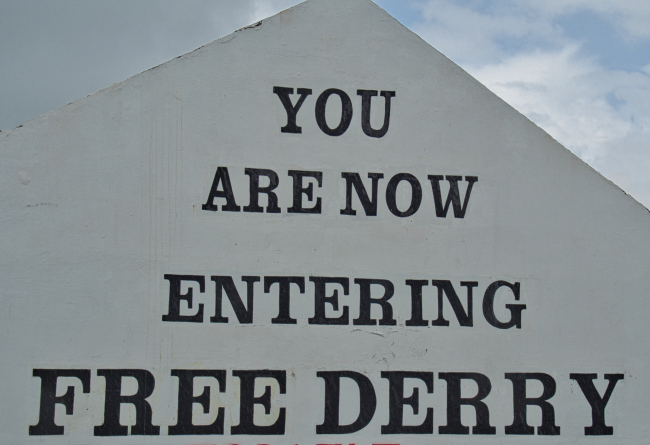 Our tour ended at the Guildhall where we viewed an exhibition on the Plantation of Ulster. Constructed in a neo-gothic style, the Guildhall is one of the most striking buildings in Derry and was originally built in 1887 by The Honourable The Irish Society. The building now houses the chamber where the Derry City and Strabane District Council meets and has a large community room with a fine organ. The Guildhall has a stunning collection of stained-glass windows, many donated by City of London Livery Companies and bearing their names. The visit to the fascinating and beautiful Guildhall in Derry concluded our visit and in the afternoon we departed for our various airports and flights back to England, We all felt much better informed and enlightened about Belfast, Derry and Northern Ireland generally after this short but enjoyable visit.