June saw the gradual easing of the lockdown, albeit with some very confusing messages from the Government. Some Primary Schools were allowed to reopen but these had highly variable levels of attendance. There was some confusion around overseas travel with the threat to force almost all arrivals to the UK to self isolate, but this was soon relaxed. Additionally, the wearing of face masks was made compulsory for travel on public transport in England and non-essential retailers were allowed to reopen. The UK's Coronavirus alert level was downgraded from four to three, meaning the virus remains in general circulation but transmission is no longer "high or rising exponentially."

The really big news in June were the mass rallies and  anti-racism protests across the UK following the death of George Floyd.

In the city, once again all events were cancelled, including the Consort's visit to the Royal Opera House. The Masters' Ironbridge Livery Weekend was due to be held in the first weekend of June, but unfortunately this was also cancelled. Instead, we held the first virtual Ironbridge Livery meeting, which was very well attended. This allowed us to form our Past Masters' Association, aptly entitled The Zoomers. I was happy to be invited to a virtual "tea and biscuits" session with the Lord Mayor, which I found most enjoyable.

Our long awaited and carefully planned trip to St. Kitts was yet another casualty of the virus, much to the regret of the 30 people who were eagerly looking forward to spending 10 days in the Caribbean sunshine! Never mind, hopefully we will be able to do it in 2021 and have even more fun.

We continued to hold many committee meetings virtually, including the Charity Trustees' Committee, the Strategic Review Sub-Committees, the Recruitment Sub-Committee, the Treasures Committee and the Wine Committee. Additionally, we had our first virtual Court meeting this month, another milestone in the 600 year history of our Company. I am glad to report that all went really well, everyone managing to get online and to use the software very proficiently. We covered a lot of business, including the proposals for the extension of my year as Master, for which I continue to be very grateful to the Company, the composition of the Court for the year 2020/21, the Company finances, reports from all the committee chairmen, an update on the progress of the strategic review, and the position of the Learned Clerk. It does appear from the feedback that the meeting was well received by all who attended, with everyone getting the opportunity to have their say. So, all in all, a good successful meeting. Having said that, there is still nothing to beat a face to face meeting, which I hope we can get back to in the not too distant future.

The month of May saw the continuation of the nationwide lockdown with empty town centres, eerily quiet roads, tube trains and railways and increasing numbers of people with the infection. The news concentrated on people's lack of ability to see each other and consequent impact on the nation's mental health. The Government commenced trials of the NHS contract tracing app on the Isle of Wight and also changed its national message to "Stay alert. Control the virus. Save lives". All the elections due to be held on 7 May were postponed for a year.

In the city, once again all events were cancelled. This included the NFRC UK Roofing Awards, The Masons Court Luncheon, The Sons of the Clergy at St Paul's Cathedral, afternoon Tea at Drapers' Hall, the Royal Garden Party, and the biggest blow of all, my own Annual Banquet. Needless to say that the cancellation of all events since March has been a huge disappointment to all concerned, but in these unprecedented times, everyone is just having to make the most of the bad situation that has presented itself during their term of office.

The excellent news for me this month was that our wonderful Company invited me to serve a second year of Office as Master, for which I am very grateful. Serving a second year as Master will give me another chance to host and attend many of the long planned formal and social events, both T&B and those of other Companies, that have been cancelled or postponed, as well as the opportunity to attend the many civic functions that take place over the spring and summer months.  I am pleased to report that planning is well advanced for the 2020-21 year in the hope that life will have returned to something close to normal by the end of the Summer.

In the same vein, I am happy to report that the City of London Corporation have announced that William Russell, the current Lord Mayor of the City of London, will serve an additional year in office to ensure continuity of leadership during the current COVID-19 outbreak. The Lord Mayor was initially due to step down in November 2020 after completing a one-year term, following the scheduled election of his successor this September. He will now remain in office until November 2021, subject to being formally re-elected later this year. The Sheriffs of the City of London, Alderman Professor Michael Mainelli and Christopher Hayward, will also serve an extra year term until September 2021.  I understand that several other Livery Companies have also taken the same decision as ourselves and the City of London, to extend the terms of their current Masters for an additional year. This is welcome news as it will enable a level of continuity and stability during these extraordinary times.

March 2020 - Covid Takes Over the Nation

By mid-March it was becoming increasingly clear that big changes were afoot. The media was full of news about a new Coronavirus that was sweeping the world. Things were becoming increasingly ominous with, for example, cancellations of many City functions, coupled with changes to methods of greeting such as touching elbows and, eventually, no contact at all. At my final livery event, the Carpenters Company Spring Livery Dinner on 11 March 2020, the changes were confirmed with the dispensation of both the Welcome Line and the Loving Cup. For the week beginning 16 March, every single livery event in the city was cancelled; and the great lockdown began on 23 March 2020. This meant the cancellation of many events, including the Lord Mayor's White Tie Banquet at Mansion House, The United Guilds Service, the Masons Court Luncheon and the Tile Association Awards Ceremony. At this stage everybody started keenly watching the news and the Prime Minister's nightly briefings in order to gain as much knowledge as possible about how things would develop over the coming weeks and months. There was a huge thirst for knowledge in the country. Simultaneously, people were beginning to think of new ways of communicating with each other, and the Zoom generation was born. Soon everybody was talking about Zoom, Teams, Skype, and many other ways of talking to each other over Cyberspace. I had my first virtual meeting with the Acting Clerk and Wardens on Monday, 23 March 2020 and this made us very quickly realise that virtual meetings were an effective and efficient way of communicating with each other under the present lockdown circumstances. and thus began our journey into the strange and new unknown territory of virtual gatherings. Little did we know how long it would last.

This month saw the country establish a "new normal", with queues at supermarkets, shortages of some essentials such as toilet paper and pasta, and the inability to do some of the things that we have taken for granted all our lives such as visiting a restaurant and bar or even having a haircut. Some people started wearing masks, but there was a shortage of those as well, and a reluctance by many to wear them. The news was full of information about the Covid-19 virus, its spread around the world and in the UK, and the sad number of deaths which were increasing at an alarming rate. The message from the Government was to "stay at  home, protect the NHS, and save lives". The capacity of the NHS to cope with the outbreak was the main focus of the Government. New hospitals were miraculously commissioned and developed very successfully and very quickly. This gave the country the resilience it required in the event of a huge increase in numbers contracting the virus. The big news stories this month were the hospitalisation of the Prime Minister, Boris Johnson, with Covid-19, and of course, the amazing story of 100 year old war veteran Sir Tom Moore who raised over £30 million for the NHS.

In the city, once again all events were cancelled. This included the Lord Mayor's Big Curry Lunch, the Plumbers Masters and Clerks luncheon, the Fan Makers afternoon tea, lunch with the Mistress Mariner on the HQS Wellington and a tour of Hampton Court with the Royal School of Needlework.

However, we persisted with our online meetings and gradually began to become more and more proficient with them. My weekly Zoom meetings with the Acting Clerk and Wardens continued and this made us think long and hard about how we might be able to use virtual meetings in the future to enable more people to participate and contribute to the work of our Worshipful Company. We held our first virtual interview for a new candidate for the Company, which again seemed to go very well. The first major test of the virtual meetings was the holding of the finance and communications committees. To our surprise and delight, all went extremely well with both agendas being covered in their entirety and all participants being able to make contributions fully and clearly. The new normal certainly seems to be working for the Worshipful Company of Tylers and Bricklayers. 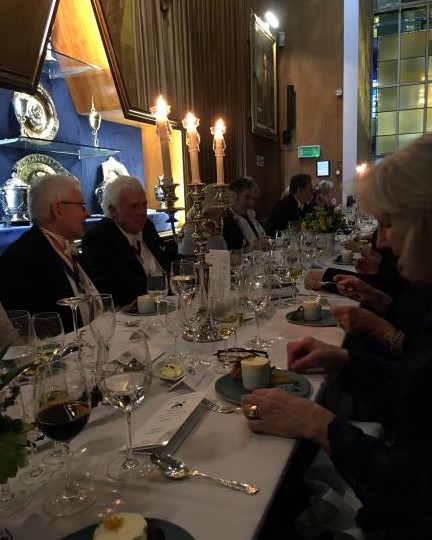 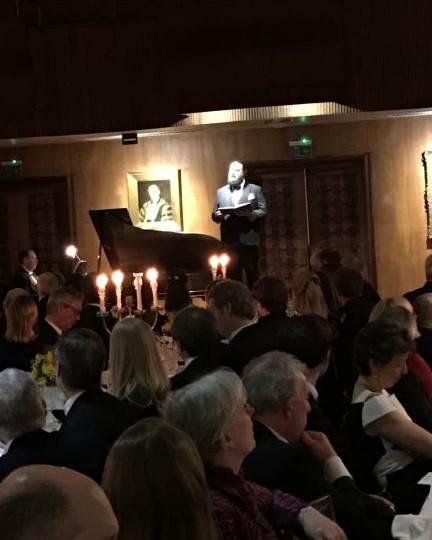