The Clinks Charity - An Insider's View of Prisons and Probation, 9th December 2019

Tonight I was invited to an event at Mansion House, hosted by Clinks and the Lord Mayor. The event was billed as an informative, lively and engaging evening with presentations and demonstrations of life-changing work from those working in criminal justice charities, and we were not disappointed. The evening commenced with a champagne reception with canapés where I was able to mingle with the many other Masters present and the charity volunteers. 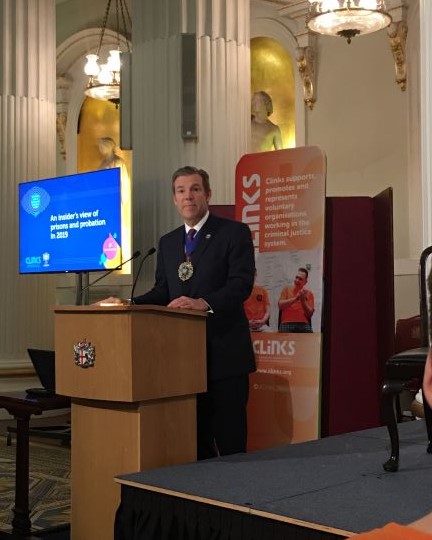 Following a welcome by the Rt. Hon. The Lord Mayor and Anne Fox, the Chief Executive of Clinks, we were treated to an amazing session by two actors from No Place Productions in which they simulated a prison visit and the difficulties encountered by couples affected by drugs and violence. It was very life-like and gave the audience a real sense of the problems faced by people in prison and their families. These sessions are played to real inmates and they have a therapeutic effect as they enable the prisoners to talk about their problems through the medium of the actors. 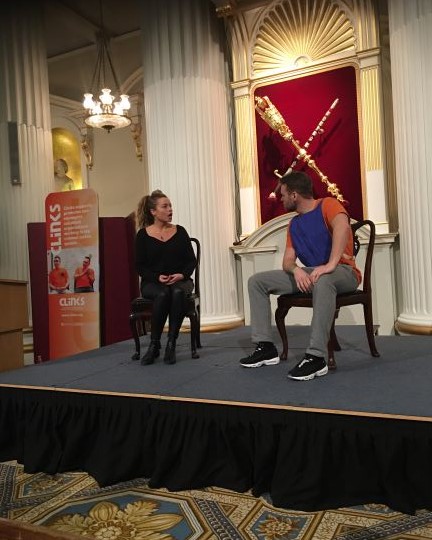 We also saw a wonderful presentation, Turning Pages, by the Shannon Trust, who support prisoners by teaching them to read and write, opening up the world of education and giving them the opportunity to change. 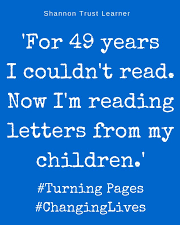 There were also presentations from the Cambridge Women's Resources Centre who provide much needed outreach and wellbeing events to women who street sex work in Peterborough's red light district, and from Project 507 who work with young people whose lives are physically, psychologically or emotionally harmful to themselves and others.

Following the presentations we were able to visit all the wonderful stands from many different charities who work so successfully with serving and released prisoners, charities ranging from small, local volunteer run groups, to large national organisations. This was an exceptional event at which I gained a real insight into what these wonderful charities achieve with very little resource but with a great deal of commitment and determination. Another very worthwhile evening.

Tonight a small group of Tylers and Bricklayers entered the mysterious and ancient world of the City of London for a tour of its medieval alleyways and buildings. The Tour was led by Past Master Mercer, Wing Commander Mike Dudgeon, a highly experienced guide who knew everything there was to know about these fantastic hidden parts of the City

We commenced our tour at the Guildhall Yard where Mike started by showing us parts that none of us had noticed previously, despite having been past this area many times. We examined the grotesques of Dick Whittington, Samuel Pepys and Shakespeare amongst others and were given a brief history of the area and how it has changed over time.The tour proper then commenced with visits to hidden alleyways, ancient churches, monuments and buildings and at each one we stopped for a short time whilst Mike gave us some fascinating information about the history, adventures and scandals that had taken place.

It was very interesting to learn some of the little known facts and visit the coffee houses where trading first began, each coffee house dealing in its own speciality of trade. 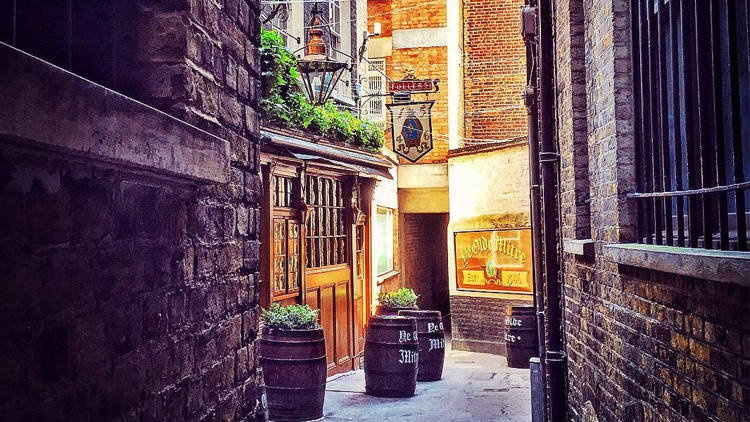 It was also an eye opener for us as Mike pointed to many different carvings and statues on walls of many buildings, explaining the meaning of each in great detail. As a Past Master Mercer, Mike was particularly proud to point out the Mercers’ Maidens which can easily be overlooked as part of the “hidden in plain sight” aspect of the City of London’s history. Quite who the Mercer Maiden is, is unknown, but she has been a symbol for one of the City of London’s livery companies since at least 1425, and her bust appears on many buildings in the City. 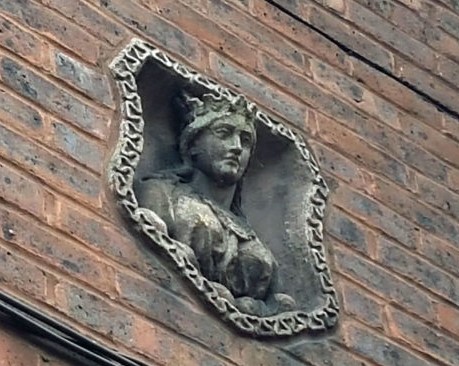 Some of the ancient and unused churches proved to be the most intriguing aspects of the tour, as were the hidden gardens which provide a haven of peace for lunchtime relaxation for those in the know. 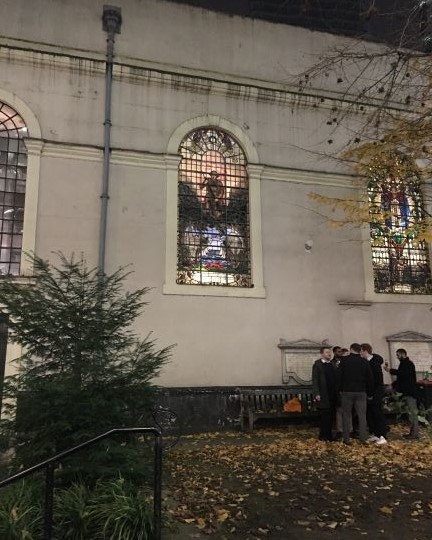 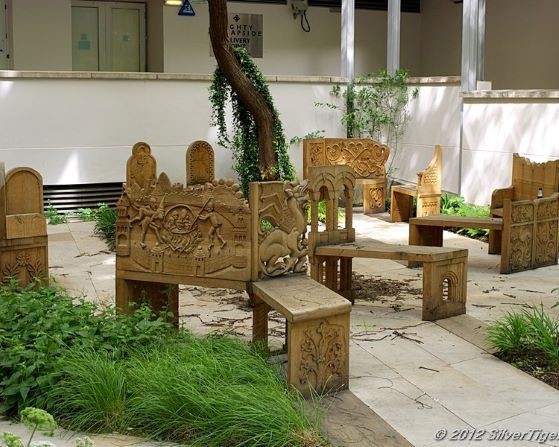 We spent a wonderful couple of hours visiting these most ancient and hidden sites, after which we retired to a lovely pub for a nice warming supper and drinks. 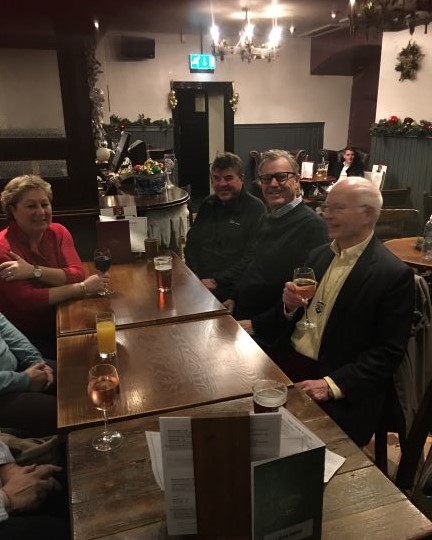 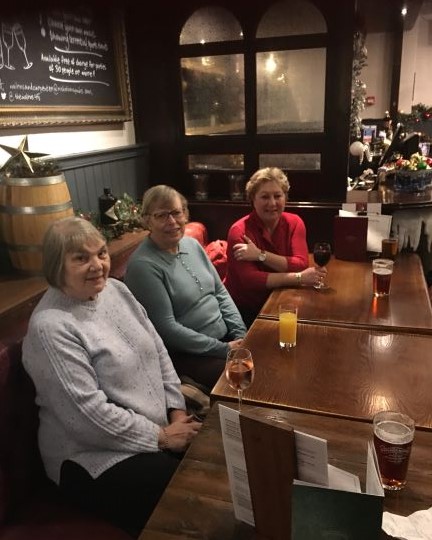 We all thanked Mike sincerely for such an interesting and informative tour, another great evening in our great City of London.

Maureen and I were delighted to be invited as guests of The Very Reverend Andrew Nunn, Dean of Southwark, for Christmas drinks at the Deanery. The Deanery is a spectacular house right on the Thames, very close to the Tate Modern, with spectacular views over the river. 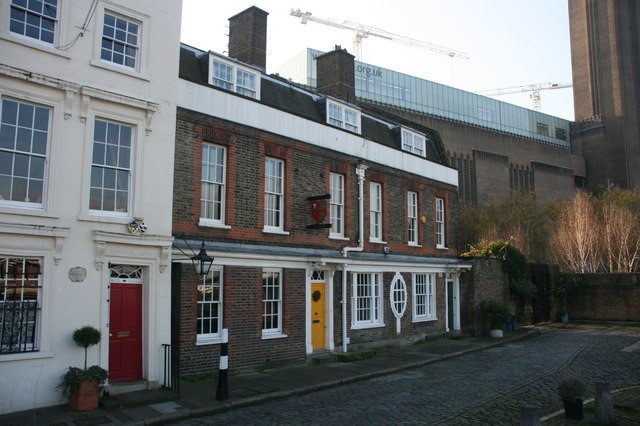 All the guests were warmly welcomed with wine and canapés and encouraged to look around the beautiful house and take in the views from the upstairs rooms. It was quite amazing to see St Paul's Cathedral directly opposite and all the other wonderful buildings that make the City of London such a special place. 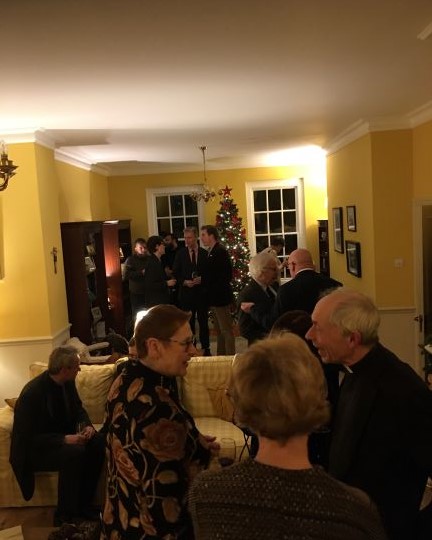 We met and talked with a number of very interesting guests, both from the local areas and from further afield. It was very interesting to hear different people's links with the Cathedral and how they interact with the Archdiocese. 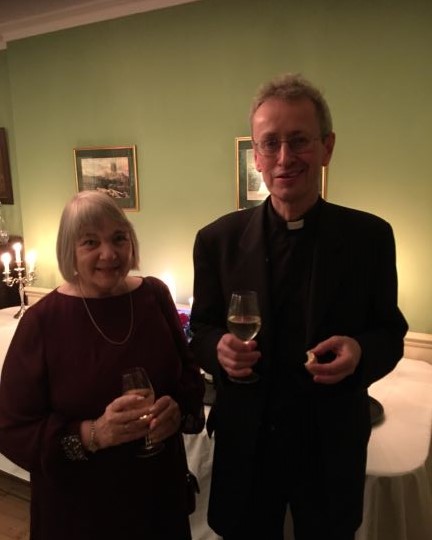 The Dean gave a short speech about the work of the Cathedral and future plans for the restoration of certain parts, but he emphasised that tonight was not about fund raising, it was about thanking all those who have been supportive of the Cathedral in the past. 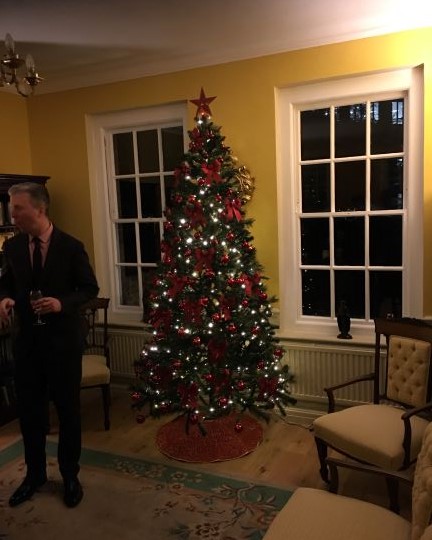 Maureen and I were very pleased to enjoy yet another very interesting and joyful evening.

Today I attended a meeting of the Tylers and Bricklayers Charity Trustees held at the magnificent offices of Fieldfisher, Riverbank House, thanks to the kind generosity of Past Master Tom Rider. The Offices are in a superb location, overlooking the Thames with amazing views of Tower Bridge and HMS Belfast.

There was a full agenda at which the Trustees were given a complete update of the financial position of the charities by the Hon. Secretary and Treasurer, Liveryman Alan Dodd, and also were given sight of the final accounts for the previous year. There was discussion about how funds are going to be raised for Youthbuild UK, our charity of the year for 2019/2020. It was agreed that a letter would go from the Master to all Liverymen asking for contributions to the Charity of the Year and that other sponsorship events may be appropriate as the Company will not be taking part in the pancake races this year, which has raised some money for the charity of the year in the past.

There was also agreement about the process to be followed for choosing next year's charity of the year, which will be similar to previous years but this time the names of the nominators will not be revealed to those present at Common Hall prior to voting taking place.

The Chairman, past Master Tom Rider ended the meeting by proposing a vote of thanks to Past Master Ian Grimshaw for his excellent stewardship of the charities for the past 19 years.

The Chief Commoner, Tom Hoffman OBE, hosted an innovative conference at the Guildhall for sixth form and senior students from the schools in and around City of London. The purpose of the conference was to inspire the students and to make them think about their future career paths by giving them some insight into the workings of the City of London. It was also a valuable opportunity to bring many of them together to mix and get to know each other. There were several hundred students present from many schools in and around the City of London and each table had a senior City representative, including Masters of Livery Companies.

I was surprised and delighted to be invited to sit on the the stage by the Chief Commoner to substitute for the Town Clerk who could not be present this evening. I was introduced to the assembly as a "Town Clerk", the first time this title has been used for my role in local government for many years!

There were presentations to the students from various Directors and Heads of Service of the City, after which there was some lively debate and question and answer sessions. Those on the stage were put on the spot several times by the students with their insightful questions and arguments. We were also given 15 seconds to persuade a Minister to "take some action" over a number of issues that had been highlighted as critical by the students, which was good fun and made us all think quickly on our feet.

After the conference I took the opportunity to chat with some of the students who told me that they felt that it was a useful session which had given them some food for thought and opened their eyes to the many career opportunities available in the City of London and local government more generally. All in all a very interesting and informative conference.